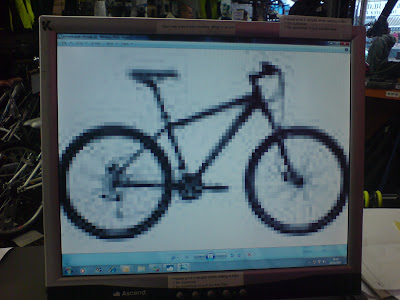 Periodically the bizzies send pictures of stolen bikes to the shop. They supply a back story and a location of where they were hoisteed, sometimes they use google maps sometimes not. The photos are always of laughable quality, very often are nothing like the bikes they have described and usually are no good whatsoever for the purposes of identification. The above photo that the bizzies sent this week was a lifted product shot of a mountain bike. From the photo I could literally ascertain nothing else. The photo file resolution was smaller than a postage stamp. This might be fine for Northumbria police super computers where you can hit that magical enhance button and turn the most grainy and low resolution CCTV footage into HD quality in less time than it takes to eat a doughnut but for mere windows equipped office machines the information gained from such images is negligible.

The magic enhance buttons on shows like CSI are laughably implausible yet the premise gets used in Hollywood over and over as a plot device. 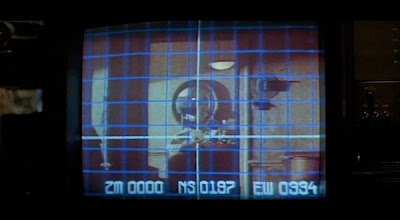 My favorite enhance scene is in Blade Runner where Deckard looks around a corner in a photo and finds a super high quality image of a female Nexus 6 replicant reflected in the edge of a mirror. On screen the image looks great but when he gets a hard copy it's the most sorry looking blurry Polaroid that could literally be anyone.

I Can't watch cop movies anymore, they irritate the shit out of me. Deckard isn't technically a cop so Blade Runner is still legitimate. And still my favorite movie. I heard there's serious talk about a remake/re-envision of Blade Runner and that really scares me, anything can be remade now usually with terrible results.

Fuck it, this is the best remix of the Blade Runner Vangelis Score, Mike Ladd featuring Company Flow, Enjoy and keep your eyes peeled around town for some fucked up and partially deressed 1980s 8BIT computer pixel bike that's been freshly stolen.