George French Gsport has reinvented the game numerous times when its comes to BMX components. When his hubs first hit the scene they were the first to seriously address the problem of bent wheel axles failing under the daily abuse of grinding. Wheels with 10mm regular steel axles just couldn't handle the progressiveness of the sport, riders were assaulting concrete on flimsy pegs and axles with destructive results. George's first hubs were progressive, his company was still called Gspot and the hub looked quite regular until it came to the axle which was the first to be what is now commonly called 'female design'. In other words the central axle was huge somewhere around 17mm as were the sealed bearings all made for strength. Smaller 10mm bolts threaded into this axle keeping shit tight and also fitting into the 10mm slots in dropouts of your frame. Hubs like this are commonplace now but someone had to be the first. Although I don't remember him saying I presume George got the idea from a Profile American BB, but who knows.


The second generation of the Gsport hub was massive, it looked like a tin of beans and was as strong as possible. Everyone in the Northeast ran these hubs from 96 onwards. In I think 97 or 98 I was seriously into grinding. The only problem I encountered with the Gsport axles was that the thread-in bolts sometimes got a little stripped and bent, not that this was a big problem beacause you could just buy more from a bolt stockist. I used to buy my Bolts from Arndale Bolt And Nut. Whenever I bought anything it was a quid, I bought a gsport bolt and an Allen key it was a quid, I bought 2 gsport bolts and a bag of zip ties it was a quid, in the end I was buying bolts in 10s and selling them to my mates for a quid each. I was replacing the bolts very frequently and after a few road trips of pegs on and off and wheels on and off for travelling in the back of a car I managed to force a pretty stripped and bent bolt into the rear axle of the gsport hub and mess the threads up a little.


I was harping on about the dilemma while on the trip with Mr Pants and he thought he had a solution of ramming a massive axle right through the whole hub. I thought it was pie in the sky Mr Pants talk but I said I'd be into giving something a try. It was late 97 and Pants ran a BMX shop in Newcastle called Fall Guys, where kids drank tea, punks pierced there own eye brows and radgees got hit between the shoulder blades full force with hammers if they tried to start any shit. Great times. Fall Guys was 2 minutes away from West gate Road the hub of the motorcycle scene in Newcastle. What Mick came up with was truly epic and full of the spirit of the 98 overbuilt era. The idea was this: 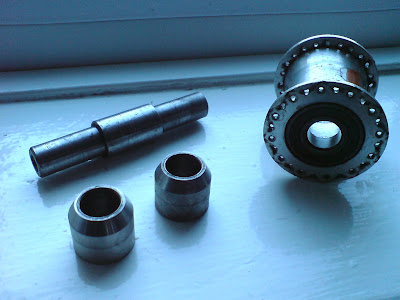 Remove the hardware from the hub, bolts cones and female axle. 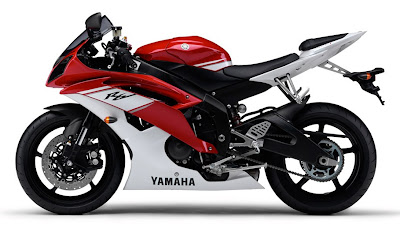 
Cut your BMX frame dropouts from 10mm to a whopping 17mm with ideally an angle grinder but in my case always a hacksaw. Don't worry in this era all frames have plenty of dropout to cut. 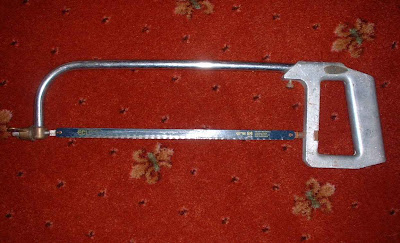 Also cut a length of handle bar to act as a shim between the bearings of the hub, and drill your peg out to 17mm (not easy) I only had a 20mm drill bit so I used that (fuck it, it's nearly right). Acquire a castle nut from a Ford Sierra steering assembly.


I do not believe anyone that claims there is a stronger BMX hub in existence to this. I simply do not believe you. There were 3 of these hubs that we put together, Micky Moore had one, I had one and Bic had one. Here's a shot of Bic's still built up.


The problem with running a super bike axle modded Gsport hub is that the axle is a skewer. 'Problem' you say 'surely a skewer is ideal giving less to break and reducing the weight of this already fairly mighty set up'. Ah but the castle nut is 24 mm so in order to run 2 pegs on the back you have to have a peg with a massive diameter to fit the bigger socket down. This problem was solved by making huge pegs from lengths of scaffolding aka scaffs.


Bics wheel in the picture is laced to a Alex Supra E rim the heaviest and strongest rim ever to grace the BMX world. I don't think there will ever be a stronger or heavier wheel in BMX than this.


I had zero problems with these wheels, indestructible is a label that gets tossed around now and then but few components rarely live up to the hype. I can honestly say this wheel will not fail. We took the strongest hub ever produced and simplified it, it was brutish and ugly and almost archaic but it worked, for me it also summed up the very essence of 1998.