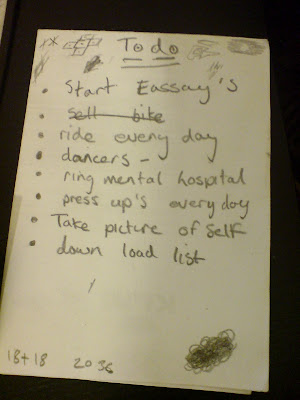 I've never wrote a to do list. I find them fascinating, they interest me in the same way as shopping lists found on supermarket floors: Gin 3, Tuck 1. To do lists give an insight in to a crazed mind, Carmine and Ratty's bedrooms were always full of post it notes containing half arsed motivational ideology and supposed forward glancing goals and ideals. If I did write a to do list I know I'd have to do it all, I'd have to strictly adhere to the list and as such, my life would by governed and controlled by the list. Its my completest nature holding me prisoner to my aspirations. Saying that, I've been promising a novel for ages now and nothing has materialised. My new years to do list would contain 3 words-The Dark Matter.
I love Cairnsy, his brain is unlike most others, he's constantly flitting between ideas but still he manages to follow a reasonably linear path. When Rob got back from Leeds a couple of weeks ago he said he was going to chip away at his essays by doing 200 words a day and thus not have a huge body of work to do in his final week. This is why I found 'Number 1-Start Essays' particularly funny because he obviously hasn't started them yet, with all the good will in the world ey? He also used a possessive apostrophe on the word 'essay's' as if they owned the full stop or something. Point two on the list is 'sell bike' which is a little disconcerting and I was relieved he had crossed it out, but with point 3 on the list being 'ride everyday' polar opposite opinions in a the blink of an eye, I was puzzeled by the speed in which a man can change his mind.
Number 4 on the list just says 'dancers' which is pretty funny on it's own.
Number 5 is 'ring mental hospital' now is this related to points 2 and 3 and that Cairnsy has some sort of split personality or Jekyll and Hyde collision of consciousness? I hope not because number 6 is 'press ups everyday' there's nothing more terrifying than a super buff mental patient.
Number 7 is all Narcissistic flamboyance and soul searching.
Cairnsy has chosen his final point as 'down load list' which is totally inconclusive and I presume only he knows what this can be.