The Dark Matter (this time it's for real). 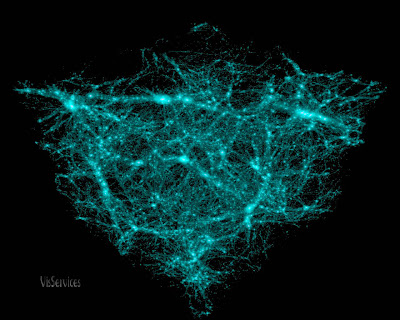 Writing a book is a bitch, I started writing The Dark Matter exactly 3 years ago, the period represents an inordinate and ridiculous amount of time to work on anything. There have been enormous gaps along the way when I've done nothing with the book, I've just let it sit in my hard drive moulding away. TDM has been consistently nagging away in my mind, a little whisper asking for attention, attention I could not provide, I either feel like writing or I don't-there is no middle ground. At text and ideas poured out of me like the flow of a mighty river, at others drought.
I was living on Cheltenham terrace and working 2 days a week when I first started working on TDM. I had plenty of time to sit on my arse in the crumby and stained living room. However I was living with Lognone, when I'd wake up around 10 he'd already be in the lounge watching sky sports news. Lognone's sky sports news marathons were legendary, I could maybe hack 15 minutes of the channel while I ate muesli and downed some black coffee and then I'd have to be out of there having absolutely no interest in football, racism or reactionary opinion. On bad whether days this confined me to my bedroom, I'd stick on some records and start writing, I would have no end in sight and no aim as such, I was just writing. These sessions would last a couple of hours or sometimes go well on into the day. Some of these sessions combined and began to resemble a body of work that was somehow cohesive and structured and after a few months locked into this schedule I had something that resembled a story, a very loose and lightly defined story.

Although I detest sky sports news- I have to admit that it is largely responsible for a window of my increased creativity.

Another contributing factor to the on going length of this project has recently been the cover. The Roops has produced an amazing cover for The Dark Matter but it has taken him an ice age to finally get it to the point where I'm able to slap it on the front of the book.


Earlier in the year I wrote a synopsis for The Dark Matter which went something similar to this;

A story of a dysfunctional relationship set against an overwhelmingly mundane background. The city is all powerful in its neon lit omnipresence. Both man and woman are oppressed by the triviality of life, a relationship divided by modern world distractions and thinking, two people cohabiting the same space while simultaneously entirely unaware of each others true existence. A mental journey of thoughts and cross thought processes. The Dark Matter is about searching for a reason to exist in a unforgiving and unrewarding world. It's a tale of obsession, madness, anarchist politics, wigga fashion and an insatiable lust for Custard Creams.

The blurb on the back cover now goes something like this;

'Postal strikes, adverse weather, damages in transit, theft and exotic animal attacks are all dangers to the package. I’m a veritable nervous wreck.


Sam is obsessive, overweight, disconnected and living in his own nightmare world, a world which doesn't appear to include Millie. The Dark Matter is a doomed relationship story involving biscuits.

If this sounds like your cup of tea let me know and I'll sort you out with a copy. The print run is going to be super limited, and self financed. I have a mental list of people who are going to receive one whether they want one or not. I'm selling them for what they cost me to get printed so depending on the numbers it'll probably be around a fiver.

It's my first time tackling something of this length, I've loved and hated this story a hundred times, been stoked and bummed on it, elated and depressed about it. I finally feel it's time to put it out there and see how it's received.

If you want one and you don't think you are on my list already or if you think you have asked me for one and think I might have forgotten, let me know through the power of Email - ollybmx@hotmail.com

I hope to be sending The Dark Matter off to print early next week so get on it.