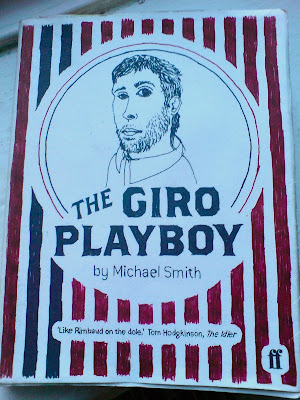 "There was a period one summer after my GCSEs when me and this other kid would get some drugs, take the train up to Newcastle and deliberately kip rough; I remember the excitement of those summer evenings, the expansive feeling of promise and possibility, of life and the city opening out for you; we'd walk round town, through all the Friday night drunks spilling out of the town centre, wander into the ropey areas around the back of the station, the broody dilapidated bits by the river, get stoned in this hilly outcrop near the big old industrial iron bridges, winding up in this all-night greasy spoon next to a shop with blacked out windows called SVEN ADULT BOOKS; we'd see in the early hours observing the drunks and weirdos and I'd write awful pretentious poetry about it in my notepad... I didn't really know what I was playing at, but then I suppose that's the whole point in being a teenager..."


Ratty loaned me THE GIRO PLAYBOY by Michael Smith just after New Year and before he returned to Canada. It's an awesome read concerning a Hartlepool lad who goes to Brighton and London and takes drugs, works menial jobs and ends up spending a lot of time in the company of dodgy types in rotten bedsits. Michael Smith could be the Northeasts answer to Bukowski only perhaps there's a shred more truth written here. There's some truly funny reading to be had in this book, I've known this awhile because years ago Ratty read me a passage from THE GIRO PLAYBOY about London where the presumptuous author had London still thronged by Victorian society populated by Gentlemen balloonists on opium, legless beggars, top-hatted occultists, syphilitic sailors, and thieving chimney sweeps; he creased me up. For whatever reason I haven't gotten the chance to read this until now, worth the wait, amazing.
Posted by Olly Olsen at 16:26