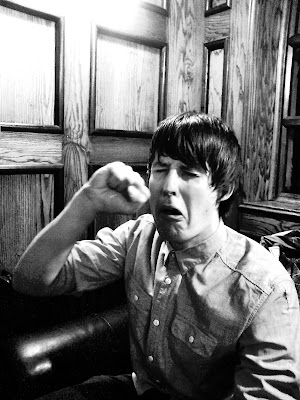 GOAT OF TRUTH,
YOU FOOL MY HEART,
LOVERS TIFF IN BOLD,
TEND MY DAUGHTER'S CALF.

FOR THE MOON WHISPERS,
IN BLUE CHAOS HUES,
THIS IS FOR THE NAKEDNESS,
AND ALL BLACKMETAL'S CREWS.

CARVED INTO FLESH,
AND BURNT IN SINEW,
SEE WITH A TEARED EYE,
HELL'S PAIN I'VE BEEN THROUGH.

UNTO THE BLOOD OF END,
OF ALL DEATH'S KINGDOM,
I HAVE LOST MY VIRGIN LOVE,
AND MY MASTER'S WISDOM.


At the 86A Heaton road incarnation of the Buff House there was a lot of tension and difference of opinion between all the varied house mates. We never argued so passionately than over music. A conflict of music systems and tunes proliferated the air waves daily. Biggie, Antony and the Johnsons, Venom, Dexy's Midnight Runners, MF Doom, Pink Floyd, Modest Mouse, Bathory, Dipset, Company Flow, Atari Teenage Riot, Sham 69, Joy Division. It was a giant sound clash of ideas and proffered listening tastes. Mundo had been brought up on with the New Monkey, spanish hardcore and all manner of happy hardcore delights and being only 17 and the younger of the house mates he had less say than anyone. I wanted to sway his musical tastes and between me and Steve Kinghan we had already manage to get him into viking metal like Manowar and Dragonforce. Dragonforce especially appealed to mundo due to the ridiculous tempo. We had a running battle rap of writtens going up on the wall to out hip hop each other to try and train Mundo in the ways of great MC masters like Slick Rick, KRS One and Chuck D. Things were going pretty well for his musical training, the sculpting of an appreciative and varied ear that was respectful and tolerable of all musical genres was our aim. The one thing Mundo couldn't appreciate was guttural and dirty vocals from hardcore punk, black and death metal. I was forever blasting Darkthrone, Decapitated, Mayhem and early Ulver much to the displeasure of Mundo. When asked why he had no respect for guttural vocals he said "it's just easy, it's just a load of screaming."
I was shocked, "you think singing like that is easy?" I asked.
"Yeah, just screaming on, It has to be really easy."
"People have to train their voices for years to be able to sing like that, it isn't easy. If it's so easy lets hear you do some then." I thought offering a challenge like this would have humorous results.
Mundo stood on top of the sofa with a Jack Black inspired comedy power stance and began to scream, "waaaaaggghhhhhh, oooohhhhhhaaaaggggggg, huuuuugggghhhhhhhh".
"Hmm" I said "doesn't really sound right does it?
"Nah, I could do it spot on if I had some lyrics."
"OK man I'll write you some." So I picked up my sketch book and wrote the above Goat Of Truth song.
Mundo initially impressed by the swiftness of the lyrics picked up the book and began to sing delivering a heartfelt and guttural performance of goat of truth, which still sounded nothing like the black and death metal singing he was trying to imitate. He retired from the couch perhaps a little more respectful and possibly less likely to write things off as easy when he had no concept of what he was talking about.