I'm mega excited about this one, my first book The Dark Matter arrived in the post yesterday. The books got posted to my mothers address in South Shields. I thought I could leave it a few days until such an opportunity arose where a driver could help me pick up the parcel of books. I ended up instead being too excited and having to formulate another plan. I would go to the Cycle Centre and fit a rack to my single speed and ride the 9 miles to my mothers and pick the books up with my bicycle.


The plan made perfect sense. It was cold out, I rode to work and fitted a quick release rack that attatched to the seat post of my bike. My bike has a carbon fibre seat post and I'm pretty sure you're not supposed to clamp weight bearing stuff around those. I made Robby Ford say that it would be fine just so I was at ease with the idea.

The ride down to Shields was fraught with high winds and numb fingers but other than that it was fairly uneventful. Once at my Mam's house I located the box and nervously opened it. The second I saw all the back covers shining out at me I knew everything was going to be alright. I had convinced myself a thousand times that something would have gone completely wrong, like the cover image would be upside down or black and white or in a bad format and be all pixelated but it wasn't. opening the first book I immediately checked the contents and to my relief it all looked in order, few. 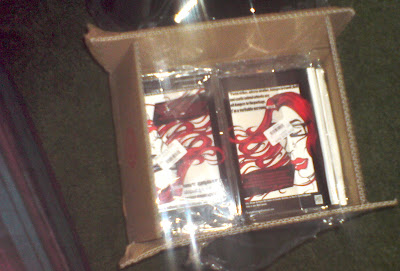 After too many cups of tea and a good long warm by the wood burner, I wrapped the 7kg box up in two bin bags and tried to fix it evenly to the rack on my bicycle. Because my Bike has quite a tall frame anyway and coupled with the seatpost mounted rack that was also way high it now meant that the weight of the bike was super unbalanced. My bike's wheelie tipping point was now with the front wheel only a couple of inches off the ground. This operation was looking sketchy in high winds alone but my Mam reliably informed me that it was now snowing.

Getting on the bike on a hill proved to be difficult as the snow had instantly frozen into a sheet of ice on the ground. as soon as I lifted a leg to sling it over top tube the resulting unbalance of rack and cargo slid the front wheel out and I all but collapsed in a heap on my mothers front step. My next strategy was to hold my bike against her newly painted railings (I could sense she was not pleased) and climb on like a horse. Finally aboard the bike I set off with extreme trepidation. The going was reasonable until I hit my first hill and realised instantly that standing up was a bad idea as the bike swung erratically and forcefully from side to side. The snow was sheeting down, it was more raining pure ice than actually snowing. My skinny road bike tyres slipped and skidded about with terrifying randomness.


By the time I passed the road house bar in Heburn I was frozen solid and was having to pump the grips to keep any sort of feeling in my hands. Ice was falling from the sky in huge clumps, it was almost biblical. There was so much ice on the road that I had to follow in the car tracks much to the disapproval of drivers behind as I skidded and wobbled with the off balance weight of books on the rack.

I had to walk the last couple of miles because I just couldn't keep the bike upright. By the time I got to the front door I was a broken man. There has been countless times on a bike where I've questioned exactly what the hell I thought I was doing and this was genuinely one of those moments. Many times I have took a step back and thought is this worth it? Am I loosing it? Why is it important that I conduct my life almost entirely on a bicycle?

I do not have an answer to any of these questions.


I was frozen to the core, I sat in front of the fire relieved that myself and all the copies of The Dark Matter had made it home relatively safely. I put my shoes on next to the fire to dry them out and while I was making a cup of tea with very shaky hands the shoes burst in to flames and spread black noxious smoke around the house.

Later in the evening I was back out in the snow to see the Misfits or what is left of them. I was never the greatest fan of the fits to begin with. As predicted the crowd was fiended up in head to toe merchandise, not knowing what to expect (secretly guessing the show was going to be lame) the crowd waited in quasi-expectation only to be faced with a Vic reeves 'in the club' style rendition of the misfits. Jerry Only got fat so he wore some 80s legion of doom armour over his ageing build. The bands enthusiasm was lower than any band I have ever seen. It was like watching a cardboard cut out, back of a cereal box rendition of the Misfits. The guitar sounded like a frettless chainsaw, sort of venom-y, like off black metal before the riffs actually kick in...

...and that works good as atmosphere but not for entire songs, I could see the guitarists fingers moving but there was certainly no audible change to be heard. The drumming was adequate but Only's singing was abysmal. It was after about the 12th song of straining really hard to hear something I recognised when I realised they were playing something from famous monsters. Terrible

A weird and trying day but the The Dark Matter is finally here, I'll be hooking everyone up with a copy soon if you have already asked for one, otherwise they're available for purchase by clicking the banner on the top right of this site.
Posted by Olly Olsen at 15:19