LETTERS, NOTES, BICYCLE REPAIR AND A RE-STOCK OF THE DARK MATTER.

I've had loads of mail this week, It feels old school and proper, I love mail and letters and notes, you find more of the senders true opinions in not just the words as you do with email but also in the handwriting and pen choice and little diagrams and the paper, its much more of a whole experience. 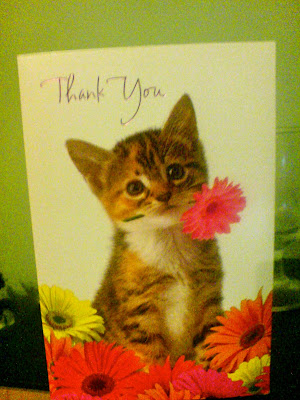 First up through the mail this week was a cute kitten thank you card from Ricky. His main reason for sending it was to include his £5 payment for his copy of The Dark Matter. We had a few laughter related moments looking at this card through the course of the week. When asked about the card I said it only says 'I know you have a Cat' inside. This sounded really sinister and since the card was so cute and cuddly I found myself crying tears of laughter and repeating the phrase 'I know you have a cat' over and over. Stupid I know, but funny. Cheers Ricky. 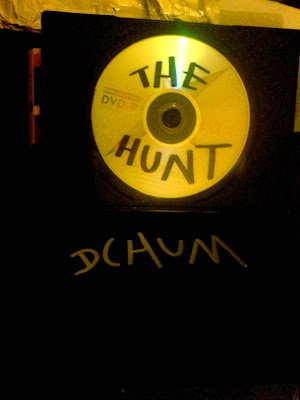 Next piece of mail was this copied The Hunt DVD. I sort of knew this was from Dchum before I opened it because it was mummified in reams of super tight parcel tape. Dchum had made a comment about The Dark Matter being highly taped up when I sent them out (I was worried about them getting wet) so I thought that It must be D getting some sort of cruel retaliation. After the five or so minutes it took me to pick my way inside the package I found this copy of The Hunt DVD and five pounds wedged in the DVD case Cheers Dchum.
I watched The Hunt DVD this afternoon and considering the hype and positive comments this DVD had received I was fairly non plussed about it. The problem faced here is like that with those Aspire videos, the sections have all been submitted from random sources with different filmers, cameras, editing techniques and ideas. It's a giant hodgepodge of themes and styles and as a whole it just doesn't work. There was a certain essential element also missing from this DVD-FUN. apart from the dude who breaks his bike, the guy who high fives a sign and Chad Kerley raising his eye brows and smiling once or twice after pulling nose manny bar on two locations there is absolutely no element of fun in this 40 minute DVD. The stunts were awesome, but it was just so flat, uninspired, dull and soulless. It's one of those rare occasions when as a whole the DVD is somehow less than the sum of it's parts. Watching this DVD is just like sitting on THe COme Up and watching 10 web vids at random. I only mention this at all because I was super disappointed in this and I really expected it to blow me away. The riding was super good but I found myself bored when watching it. Partially reviewing a copied DVD goes against every rule in the book also, I can hear people calling support the scene, buy DVDs, keep BMX going; but I do buy DVDs just not all of them, How many kids of 17 and 18 who are fully immersed in BMX are sitting in a bedroom with not a single DVD or magazine around them, there probably wearing a monster energy cap and a pair of Nikes too. Cheers for the DVD anyway D it was a nice thought. 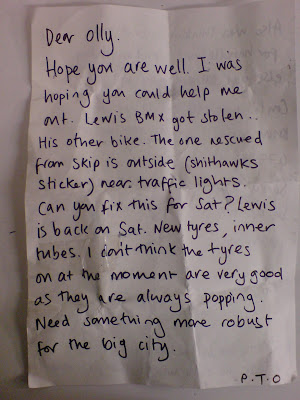 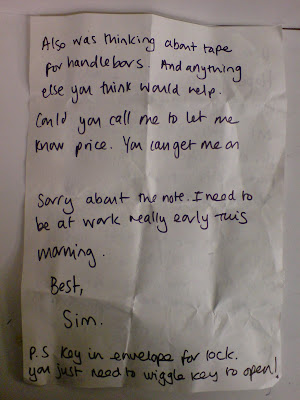 Next up note wise was this letter from Sim detailing the repair of Lewis's bike which I found tucked in the shutter at work. A scooby doo mystery for first thing in the morning. As detailed above Lewis' BMX had been stolen from his house earlier i the month so he was having to do up his skip find! The kid has no luck with bikes I tell you. You may remember another unfortunate story about his bike in The Albion number four. 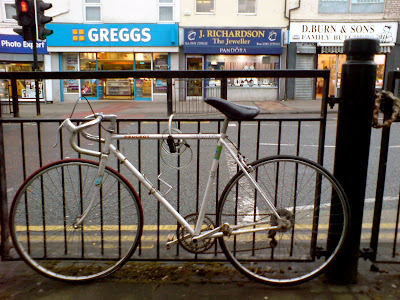 The skip bike was locked just outside the shop and I had already clocked it as Lewis' bike. It was indeed in bad shape and yes it did have a double flatty. 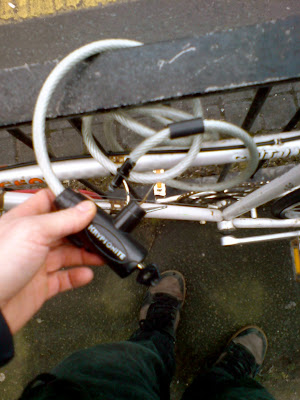 The key from the envelope did fit the lock and I did have to wiggle it a bit. I'm quite surprised the bike was still locked given the lock's quality and the fact that it was locked on Shields Road Byker between Jackson's and the Grace. 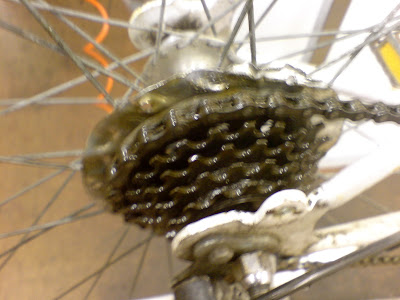 Lewis' pie plate was badly bent out of shape and causing havoc with his gears so I smashed it about with a hammer and punch until it was compliant. While I was doing this Alan was checking the mystery Huret group set on line and he shortly later reported back that the vintage french Huret pie plate can be sold in bad condition for 25 quid on eBay? Oops, I should have removed it instead!

Other work on the bike consisted of new inner tubes, lube and adjustment of the 5 speed gearing system, new clear super sticky brake pads in an attempt to get the singular 40 year old road calliper to actually slow this beast down no matter how much obnoxious brake squeal they provide, at least Lewis wont need a bell now, and finally new lime green bar tape, be safe be seen and all that. Happy Manchester Lewis. 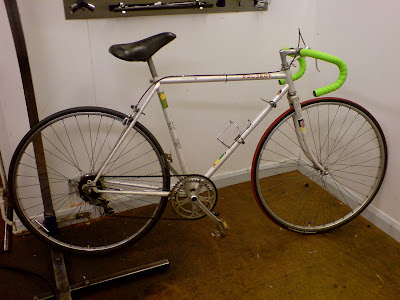 After throwing a few marijuana tinged Dub Stickers on this whip I took it on a ride. It felt surprisingly good, the big ring five speed with friction down tube shifter is simple but versatile, I thoroughly enjoyed it and it made me wish that I never got rid of my old peugeot. 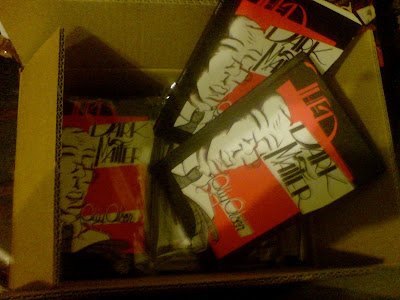 My final piece of mail came this morning in the form of more copies of The Dark Matter as I flew through the first batch in less than a fortnight. This time I ordered a hardcover version for myself which has come out super nice, Stoked. Hit me up in the comments, via email or twitter if you're after a copy.
Posted by Olly Olsen at 22:35