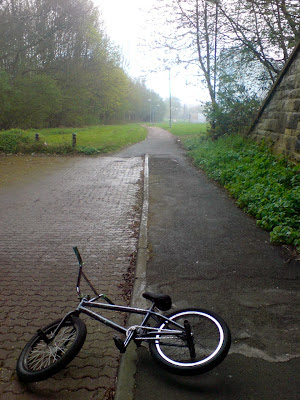 I wonder how much of my life I've spent sat under bridges with my BMX waiting impatiently for a rain shower to end. Proliferated with broken glass, used insulin syringes and racist graffiti railway bridges and tunnels make the perfect sudden shower escape in the street. The smell of piss is always pungent and hanging heavy in the air, nettles struggle to reclaim the earth through cracks in tarmac and white footprints fade the further they get from an emulsion paint spillage, all while rain thunders to the ground beyond the dry threshold of the bridge.
The immortal quandary approaches, should I stay or should I go? The sky is black with heavy cloud, realistically I could be stuck here for an hour and when desperation strikes be forced out to face the same soaking anyway, if I stay there could be a break in the weather in 5minutes and I could be home and dry in 15 shit stripe excepted. What to do?
Contemplating my fate I half remember a quote from Hagakure-code of the samurai;

"There is something to be learned from a rainstorm. When meeting with a sudden shower, you try not to get wet and run quickly along the road. But doing such things as passing under the eaves of houses, you still get wet. When you are resolved from the beginning, you will not be perplexed, though you still get the same soaking." 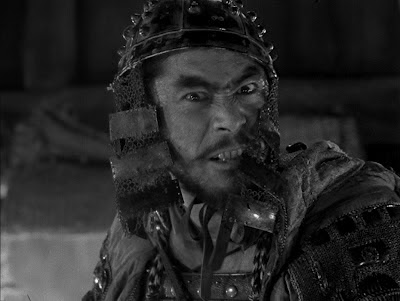 April is tough month for riders in England, it's getting warmer-even though it can still snow, the nights are getting lighter but icy winds still bite and worst of all the sun flits like a firefly in the night appearing and disappearing in intermittent chaotic cycles only to be replaced by black skies and pelting rain and hail downpours. April is the time to knuckle down and session five bridges solidly enjoying the sun on the flat bars but half under concrete if the rain does decide to kick off. April is a month to test your resolve. 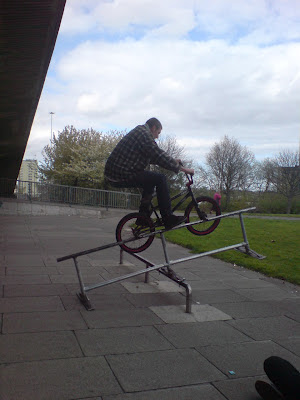 Greavsy drops the double peg portapeg seesaw out of the relative comfort of under bridge concrete... 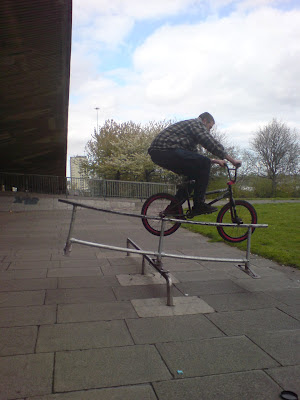 ...and into the lightly spitting windy maelstrom of the Gateshead great outdoors (check the flex).

And after the 20th soaking in as many days what better way to spend an April evening than sat against the radiator with a cup of tea and Jeff Stewarts novel - March of Time and Skin. 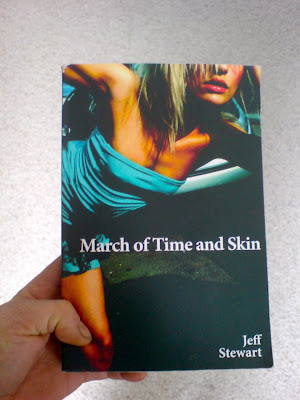 I've been a massive fan of Jeff Stewart's writing ever since he covered the Sombre finding shade trip with the Gonz, Ratboy and Smoker Dave in Ride Magazine many years ago, his recent work in the Albion about Ron Wilkerson was also amazing. Shouts to Steve Bancroft for sending me this through.

After a solid soaking and a dash home it's all about the comfort food. Sitting and staring out of a window watching rain bounce up a few inches is highly depressing but some high energy snack can push the bad weather blues away. Now I'm a vegetarian (a real vegetarian, I don't eat fish, chicken or gelatin) and before you start shouting fag, hippy, tree hugger or any of that shit at me when I'm in the street with my Mam hear this, I'm only a vegetarian because animals disgust me. I simply could not entertain the thought of putting their disgusting and rancid fur covered, shit smeared, bum licking flesh anywhere near my mouth. Horrible, absolutely horrible, I hate all animals. Having said that, I'm from South Shields and I have lived all over the NorthEast I don't want to cast my culinary heritage and sausage and bread based colloquialisms aside.
The North is know for:

Stottie cakes (bread yes, but better than normal bread) this is fine, perfectly vegetarian is the stottie.

Brown Ale, hmm a grey area, yes they filter it through fish bones but the fish bones aren't in the finished product so I say fair game.

Saveloy (a sausage) not great, saveloy are made of pork cheek, mechanically recovered meat, connective tissue, pigs cocks and fanny lips, this is then mulched and smoked.

Pan Haggerty (a kind of stew made form corned beef and potato) not at all vegetarian.

Pease pudding (Newcastle's answer to hummus, originally made with lard but now not) boiled split pea product, definitely for veggies, in fact any one who says they're a vegetarian and doesn't eat pease pudding I brand a liar. I can't believe a vegetarian could get enough sustenance without this wonder product. Pease pudding is the versatile saviour of the vegetarian, it goes with everything, it goes on everything and can but put in anything. Eat it on toast, in a sarnie or spoon it from the pot, it's the most amazing wonder food ever invented and I firmly believe it should be our national dish.

Here's a few Pease Pudding ideas to help you through this April. 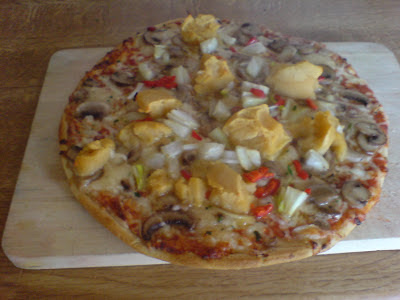 Pease Pudding Pizza, the triple P threat, mushrooms onion, chili and huge dollops of the pease pudding. The pease pudding sort of forms a crust in the oven and inside there is delicious molten pease pudding which flows through the cheese, the perfect post ride recovery food. Back in 86A Heaton Road Lewis and I were in our deepest stage of Pease Pudding addiction, we were spooning pots of the split pea goodness into our mouths thrice daily. When I unveiled the triple P on him he had the front to tell me I had finally lost it and gone to far. From that day on I branded him an unbeliever, he was on the wrong side of the fine line which separates genius and madness, Pizza and pease pudding-a beautiful union, don't you get it already? 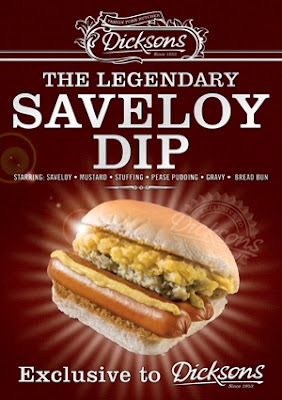 Dicksons Pork shop is a Newcastle institution, Greggs might get all the props but Dicksons is the real bad boy holding it down on the street. The saveloy dip is their ultimate sandwich, a smoked saveloy halved, covered with mustard, stuffing and pease pudding, served in a bun which has been half dipped in onion gravy, mind blowing. As a child my mam used to bring these in on a Saturday dinner time and we would chomp them down real quick. Ever since I became a vegetarian half my life ago I've had a nagging dissatisfaction with life, a hole in my world,  a void in my psyche. This void could only be filled by my favourite sandwich from my youth. What was I to do? Break veg and put one of those disgusting shit covered animals in my mouth to satisfy my unholy need for onion gravy drenched deliciousness both spoiling my years of abstinence and disintegrating my moral fibre. No no no, I would learn how to construct this Newcastle culinary classic in a meat free form. 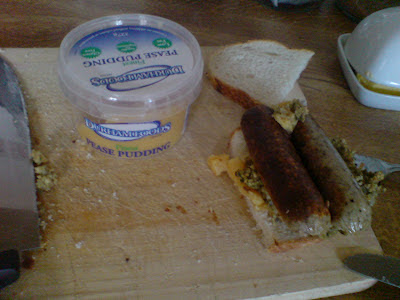 Durham foods pease pudding is basically the bomb, the zenith of the pease pudding world and completely vegetarian containing only yellow split peas, salt, pepper and water. Most sage and onion stuffings from packets are also meat free check the packaging. I used a fried couldron foods meat free cumberland sausage for this sandwhich but many are available and all work well, idealy the sausage should be boiled. Mustard on the bread. The gravy I used was just Bisto granuals, who knows what they put in that shit, I'm certain it's bad for you but it is veggie. I used tiger loaf because it absorbs more gravy than a bun and has more stability when filled with the aforementioned gravy. 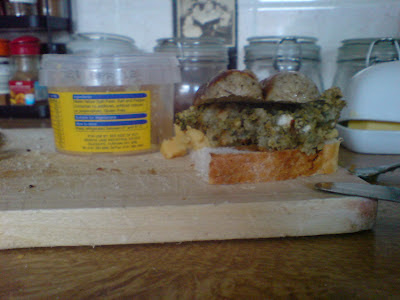 Half way there, just dip the bun and it's done. 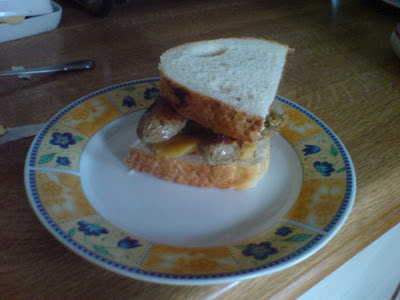 It's done, it's amazing, eat it quick before the bread dissolves. Is it as good as the real thing, is it fuck, but it's as close as you'll get without eating pigs rectum and brain.
Live strong, ride hard, eat well, and try to find an undercover spot, May will be here before you know it.
Posted by Olly Olsen at 23:35