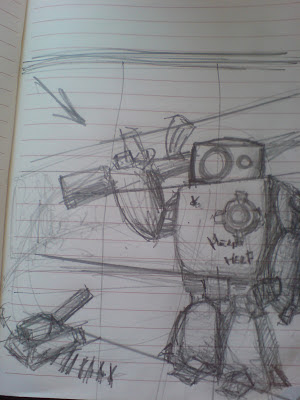 With the weather taking a nose dive, the amount of time I can spend on my bike in an enjoyable way decreases sharply, this leaves me with spare time to fill in other ways. One of the ways I fill this time and energy is with painting. I'm not the best painter but I do enjoy splatting paint everywhere and making a mess in the kitchen and on a piece of canvas or in this case an old drawer bottom made from a hardboard like substance. Above is a sketch of a robot I doodled while watching masterchef. 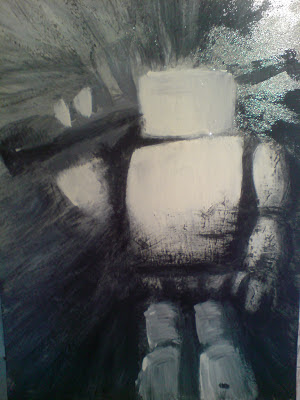 After dismantling a cabinet in my bedroom I had all these drawer bottoms which were roughly the same dimensions as canvasses for portrait of landscape. I roughed in the values in a mixture of oils and enamels for that never should be done in a real artistic world kind of vibe. 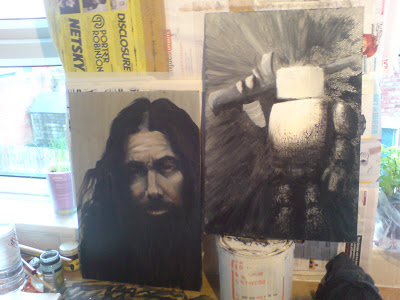 Above I have the values and composition more or less worked out but the gun is not sitting with me right no matter how much I tweak about with it tonally. initially I thought I had tried some ridiculous impossible light source that wouldn't ever happen in real life, but although my lighting was fairly high contrast and sort of army camp search light in colour I thought it was more or less right. After a day of looking at it every time I went in the kitchen to make a cup of tea it suddenly dawned on me that I had initially sketched the robot holding a gun on his shoulder but the gun wasn't touching his shoulder it was just hanging about in mid air behind his head mystically. This kind of thing gives an awkward weight and imbalance to a composition, and even though I'm a bad enough painter to make this mistake my subconscious mind was telling me that something was wrong in a big way. The portrait next to the robot is something else I've been working on but am not happy with, it's supposed to be a portrait of Stephen O'Malley from Goatsnake and Sunn 0))) but Here it isn't quite right (it's marginally better now). 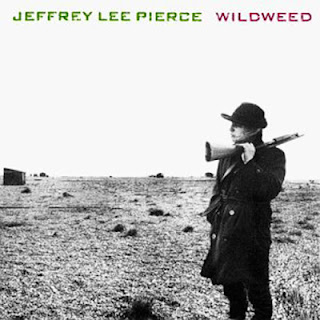 I typed 'gun over shoulder' into google and one of the images to come up was this album cover. I liked the positioning so I tried to crowbar it into my own image to fix the bad composition. 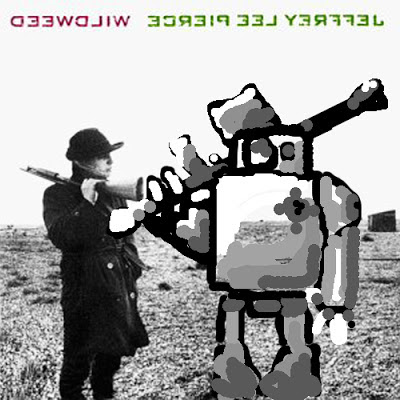 I flipped the image and it was enough to inspire this digital paint sketch fix for my painting where the robot's gun rest firmly on his shoulder. 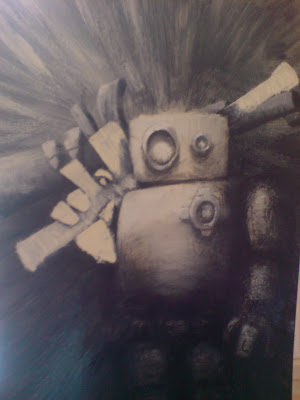 I painted the new gun's values over the old one, some of the face and chest details have been put in here also. The weight looked better here and I was finally sort of pleased. 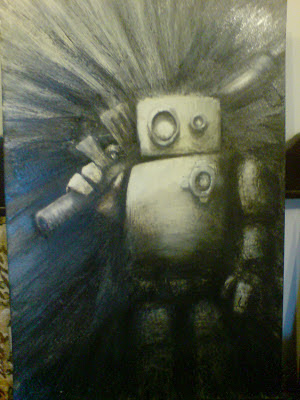 It was then just a case of rendering the gun and throwing a few highlights about, and blocking my compositional mistakes with a murky sun blast thing in the background. Like I say I'm not the best painter but I enjoy solving weird compositional problems that I regularly paint or draw myself into. Just like bike riding or playing music, painting is a never ending journey through life where you can only learn more and get better. 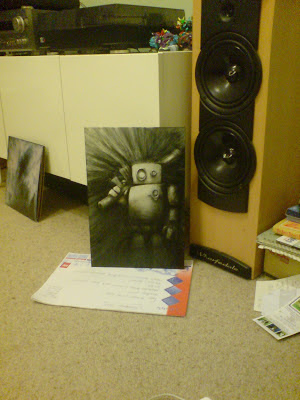