A couple of eerie Landscapes 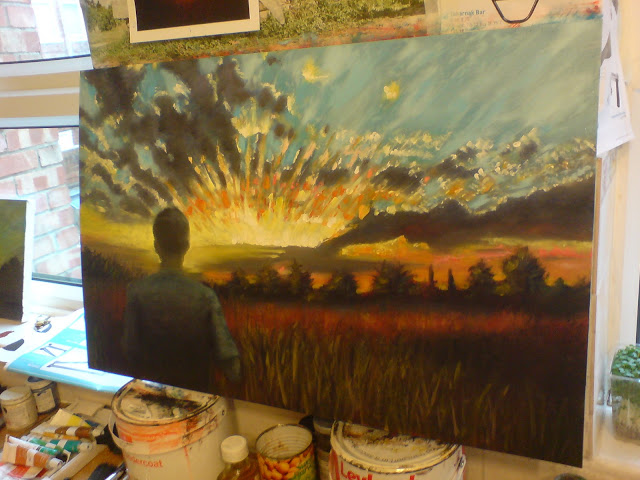 Here's a couple of paintings I've been working on recently, first up is this sun burst, sun set type deal, oil on board. I was influenced by a photo I took of Ratty staring into the distance while we were stranded atop the rugged roadside while broken down in Copenhagen. Daz's camper van had caught a flat on the way back from Malmo Sweden and we ended up waiting about 4 hours for roadside assistance because the spare had rusted itself solid to the underside of the vehicle and no amount of hammering with a Wilko hammer was going to get it shifted. This painting itself caused me a bit of grief when trying to get a good range of values, I kept flattening it off with a sky which was too dark in the mid tone and not light enough in the highlight. I got it muscled roughly into shape eventually. I'm still not that sure about it, but I've finished/abandoned it now, I can't think about it anymore. I think it has a certain haunting mid American corn field horror to it. 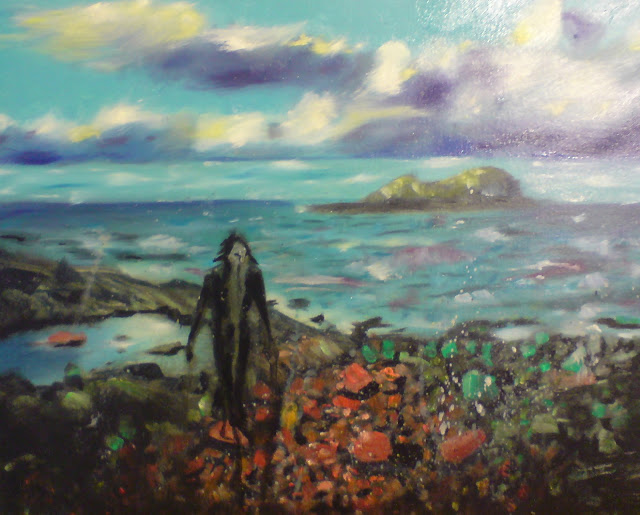 Second up is this painting which is oil on canvas and borrows in composition from a coastal shot I took in North Berwick last year. The rocks on the beach are all black and volcanic and coarse and moody. The sea was wild and the wind was hammering in. It felt like a sci fi beach with damaged space craft wrecked just off the shore. I think I'm always shooting for the feel of that Alien 3 beach landscape scene in the back of my head. I know that was actually shot in Seaham but its altered quite a bit in the movie and the area of Seaham for real never feels that furious.
Fury Fiorina 161
The character was intended to be weightless and vampiric but ended up being reminiscent of a skinny and long-bearded MF Doom.
The question is-if MF Doom went to weight watchers, grew a long beard and visited a beach in North Berwick on a blustery day, would he wear the mask?
I'd like to think he would, but it would certainly make eating his ice cream cornet much more challenging.