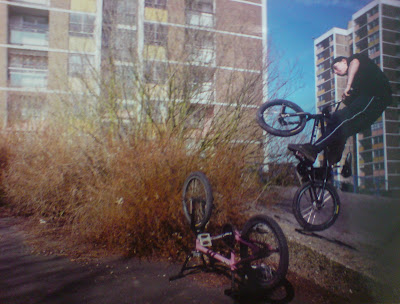 The above photo is of Rupert 180ing over an upturned BMX at a 70s snake run come roller-park between the flats of Cruddas Park in the West end of Newcastle. The area between the flats consisted of banks and berms and sub box areas all sculpted from incredibly rough tarmac. I can't believe it was purpose built for wheeled sports but to look at it you would have thought it had been. There's no mention of the weird rideable construction that resembled a skatepark online and it was removed about 10 years ago when they landscaped the area between the tower blocks. We had a good few sessions there jumping over the fences and grinding the sub rails and sub boxes and never got in any real trouble.
The only time I saw anything dodgy happen was when out of the corner of my eye I saw a flashing super sonic ghostly apperition followed by an almighty crash, when I went to investigate I found at first a fork then a sausage then some fried bread and crockery fragments and after a good look around I found every component of a fried english breakfast including beans, bacon, sausage cutlery and plate, what a waste. I pictured some poor old sole giving his wife a bit too much verbal that day and having his freshly cooked breakfast snatched from under him and launched out of a 14th story window. A dangerous act of retaliation for anyone standing below. If id have been standing 30 feet to the left I'd have probably been killed by an english breakfast, I know they're bad for you but it's not really how I pictured going out. 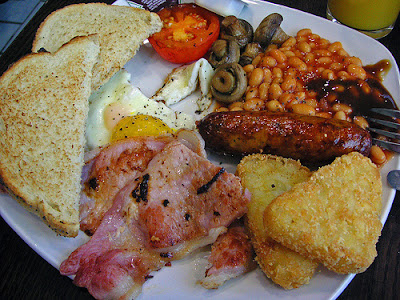