I Bought this EAI Bareknuckle track frame and fork about 2 and a half years ago. It was the first fixed gear bike I'd ever spent any real money on. All my fixed gear bikes up until that point had been cast off hybrid's, 30 year old road bikes and stuff scrounged from Recykebike. It felt a bit weird to spend a lot on something that basically gets wet, gets me about and gets locked up while I drink pints. But I was really swept up in looking at super nice track bikes and I had some spare money after working loads that Christmas. I built the Kawasaki green Bareknuckle up with loads of blue bits. Blue Velocity V rims built radially to Gran Comp front hub and built tangential to a Halo rear hub. Blue Nitto riser bars and NOS blue Sugino BMX chain ring. The bike ended up almost too brightly coloured for me to handle but rode good in a twitchy and unhinged way. It was like a wild and bucking steer, I was having to hold on to the reins and hope for the best. I've been riding a brakeless fixed gear bike since 2007 and I consider myself fairly competent on one but this bareknuckle was something else, super stiff and fast with a high seating position, it was just wild. I know it sounds weird to describe it this way but the brakes were better on this bike than any brakeless track bike I've ever ridden. Because the chain stays are so short and stiff every time I locked up the cranks it skidded to a halt all the faster.


The Bareknuckle was getting a lot of attention from radgees and opportunist thieves in the street. I got heckled constantly while riding it in it's blue and green themes, so I decided to dull it down a bit by painting everything that was blue good old matt black, the best way I know to make something look less spectacular. I was having a bit of carpal tunnel trouble in my wrist so I threw a longer stem on. The only one I could get my hands on that felt right was a Kronos stem off a £99 JJB full suspension bike that C4's Dad had purchased at a police auction. Carmine had single speeded the JJB in our yard and left loads of hoopty bits lying around. The hideous stem was a bronze colour but after a good matt black spray job it was still equally hideous only now it was matt black. Incidentally Carmine spent weeks doing the JJB up and the swinging arm snapped the first time he rode it to the shops. JJB quality is high.


Living in Whickham forced me to retire my Bareknuckle as a commuter as I couldn't get up Dunston bank on it and I wasn't prepared to push for 10 minutes everyday. I bought a steel Kona road bike and put the Bareknuckle into storage. Braking on a fixed gear bike had begun to make my knee ache quite intensively. It was only now and then at first but it got worse and worse. This cleared up as soon as I started riding my road bike and hasn't returned. So when I decided to set the Bareknuckle up as my winter bike it was going to be single speed freewheel. The wheels I had been running had no braking surface so I was going to have to change things up.


The front wheel is a stock Shimano road wheel semi sealed QR hub with bog standard double walled rim with a braking surface. I put a 5mm allen skewer in because I don't like the look of QR handles poking out of the wheel all ungainly and pointing at strange angles. I built the rear wheel from a salvaged hybrid rim that came in the shop. The hybrid wheel had been well looked after but for whatever reason the hub had collapsed prematurely. I cut the rim free of the destroyed hub and built it onto a standard and unbranded sealed Fixed/free high flanged hub. I spoked the wheel tangential on the drive side and radial on the non drive.  I only had enough spokes of the correct length for the drive side and not wanting to order more it was the easiest solution to radially lace the non drive. The spokes are black one side and stainless the other which is a little weird or a bit awesome if you look at it optimistically. I like to think of this wheel as a Starwars wheel-light and dark sides of the force represented. With the wheels built I fitted some brakes, the front is a 1985 Dura Ace of Ratty's cousin's Dave Marsh road bike which allegedly did the Tour De France. The brake doesn't keep centered very well but it's got that classic steez. The rear brake is a bog standard unbranded new road calliper. I had to cable tie the rear cable all along the top tube because there are no cable guides on this frame, looking sweet. I acquired a dirt monkey rear guard for those wet days. Practicality and functionality was finally overpowering coolness.


I fitted an even longer stem for this winter as I was used to being a bit more stretched in the drops of my road bike. Because we only get about 10 minutes of light a day in the winter up here in the far North I fitted this super bright Oxford torch light to the bottom of the stem. It's sick for 3 reasons; it's bright and I can see where I'm going, cars can see me (maybe) and it reminds me a lot of the Colt 45 long slide with a laser sight like in the terminator movie. Actually when I thought about it it looks a lot more like this FBI hand gun. 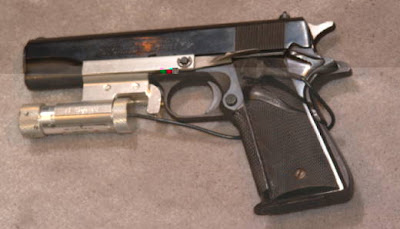 But in my minds eye it was all Arnie. 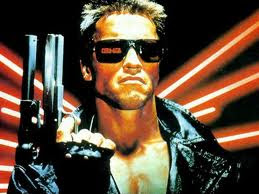 I recently read the story of the laser sighted Colt 45 long slide. It was made by a company especially for the movie and never existed as a real weapon. There were 2 versions of the gun a dummy for convenience wielding when filming and a real laser version. The company couldn't find a way of miniaturising the laser's power source enough to fit it in the gun's stock so a wire was routed down Arnie's sleeve to a battery in the pocket of his jacket. The company received no payment for this weapon and had only a tiny mention in the credits of the movie as compensation. Seems a bit tight of James Cameron, I guess at the time he only had Piranha 2-flying fish under his belt, cash could of been kinda tight. You can read the full story of the legendary weapon here.

My bareknuckle is fully awesome for the winter, coasting down hills, minimal no gear hassles and fun across the board. I get some funny looks from the uber cool fixie kids but fuck em, I was riding brakeless before them anyways.
Posted by Olly Olsen at 20:54