Last week I went for a bike ride with my good friend Scott Taylor. I was on a Cube MTB that I have just put together and he was on his clapped out Raleigh Team Banana that he crashed into a wall a couple of months back while he was pissed. The Banana's top tube got creased and the forks are so far bent back that the front wheel almost touches the down tube. The Banana's handling is sort of compromised and it creaks like a rusty gate on anything but perfectly flat tarmac, also the chain falls of if you try and ride out of saddle. The odds were stacked against us but it was a beautiful day and Scott really felt like going to Wylam. 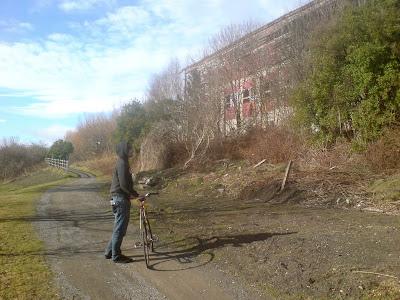 On the way along the river we found this ancient and massive barn. It sounded like the barn was still in use as we could here work going on inside. It looked like an old American saw mill or something you'd expect to see in the Appalachian mountains. 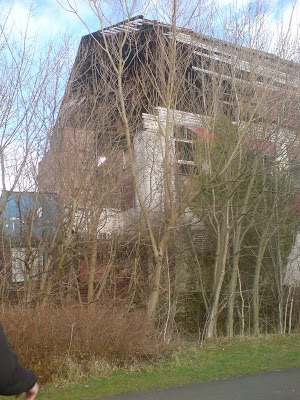 I could almost here the banjo's playing as we stared at this wooden and steel framed house of industry. It certainly wasn't the sort of thing I'd expect to see on Tyneside.

I had this tune firmly stuck in my head and I thought it weird as England so rarely looks like America. 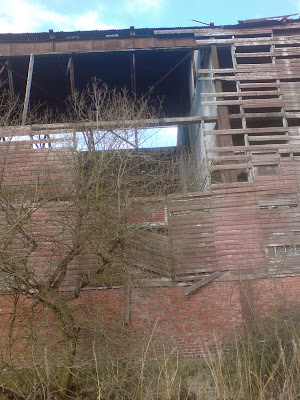 We rode on at a fairly subdued pace in the beautiful winter sunshine just enjoying the countryside and getting some fresh air back in our stuffy winter lungs. Scott wanted to stop in Wylam at his favourite pub the excellent Boathouse, full of queer country locals with dogs on strings, blessed with immense country vistas viewed from the sunny beer garden and home to an amazing selection of local ales. 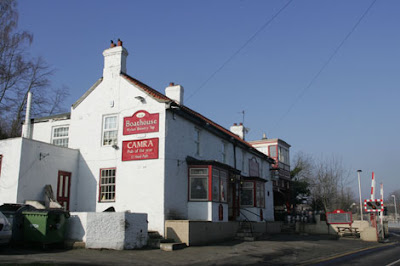 After a couple of pints, some chin wagging and a plate of chips we carried on riding up into the country, we had no idea where we were heading. Scott saw a lake and badly wished for his rod and fishing gear but it was not to be, we opted instead for sitting in a grassy pasture while he made and smoked a J. 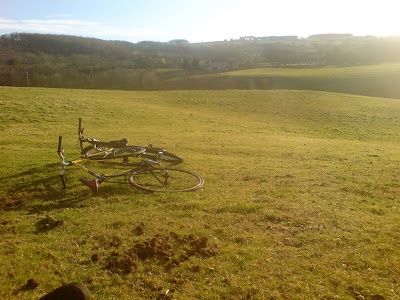 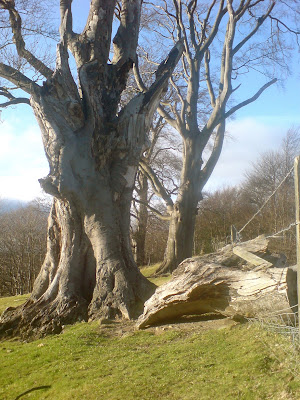 In the field there was this awesome old gnarled tree which we ascertained must have been struck by lightning as it was all charred and had a large v shaped piece blasted out of it. We studied the tree for ten minutes and this was before we had even lit the J. The tree was so varied and fascinating and so so gnarly. 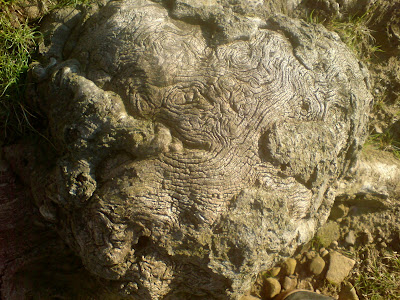 This area of the tree we named the brain for it's freakish pulsing growth area. 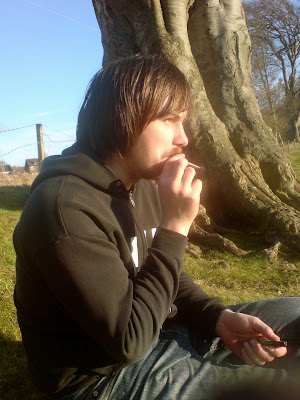 Look at Scott in this picture, he looks so contented, at peace and serene, about 5 seconds after this photo was taken a wild horse appeared out of nowhere took a nervous glance at us and decided to charge full gallop towards us for 100 meters. Scott and I were so peaceful and chilled sitting in the sun that the gravity of what was happening didn't really set in. The horse was flying towards us, it's hoofs were grinding the dirt beneath it and it was on a 100% collision course. I thought in an instant I should probably stand but I doubted whether I'd get up in time. The horse was on us. I thought back to Tolstoy, Dostoevsky and other Russian classics, people were getting trampled by horses daily on the streets of  St. Petersburg.

“Merciful heaven!” wailed the coachman, “what more could I do? If I'd been driving fast or had not shouted to him, but I was going quietly, not in a hurry. Everyone could see I was going along just like everybody else. A drunken man can't walk straight, we all know…. I saw him crossing the street, staggering and almost falling. I shouted again and a second and a third time, then I held the horses in, but he fell straight under their feet! Either he did it on purpose or he was very tipsy…. The horses are young and ready to take fright… they started, he screamed… that made them worse. That's how it happened!”

As drunks we didn't stand a chance and this horse was really coming at us full bore. I imagined Raskolnikov discovering us later bloodied and mangled with hoof imprints in head and chest, was this the end? Luckily our bikes made the horse turn a little not 10 feet from where we sat as he stampeded towards us, having said that he could have jumped both bicycles in a single bound, well for whatever reason I doubt I'll ever fathom the horse turned at the last minute and ran behind a tree and into the corner of the field, it looked me in the eye then bolted in another direction never to be seen again.

I looked at Scott and he was as frozen and terrified as I. Did that really just happen was our general consensus. We had a laugh because neither of us had done anything but froze in position with fear but now it felt like we had bested the dumb beast, like we had bravely stood our ground and forced the horse to bottle it's stampede, if only that were true. And that was all the drama of our ride, we checked out some lakes, skimmed some stones and just made it back to town before nightfall.

The next time I saw Scott was today when he finally decided to retire his old Raleigh Team Banana due to safety reasons.

This song was rolling through my head the whole time

And maybe this as well

You know sometimes life just gets you down, money, girls, the tax man, work, your fucking boss giving you a hard time, you step in some dog shit, a bunch of teenage girls heckle your fashion sense or haircut in the street, you get hassle from the man, the police pick you up on some bull shit misdemeanour, you loose your keys and have to stay all night under a bush at the wastey, you get a flat miles from home, you get a flat at home, the baguette place puts chicken in your vegetarian meal and refuses you a refund, you get your dick caught in your zip when using the bathroom. Life's full of bullshit and sometimes for no reason whatsoever you just want to vent that steam, expel that rage, blow that gasket and just smash fuck out of an inanimate object. 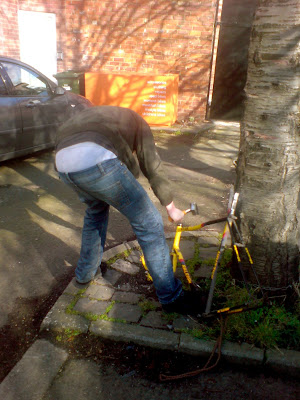 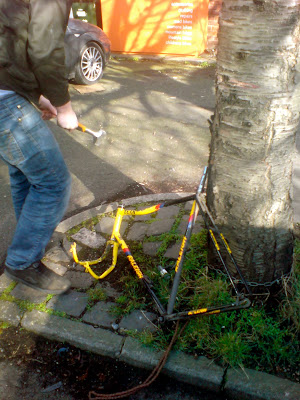 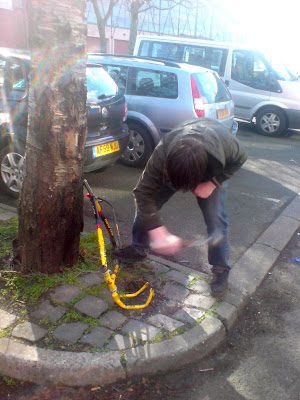 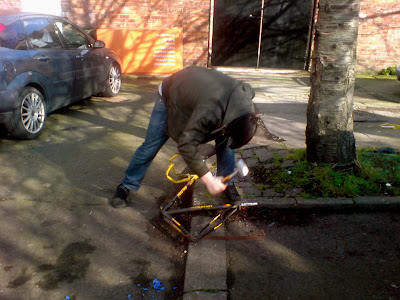 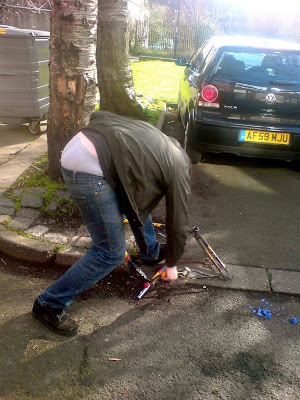 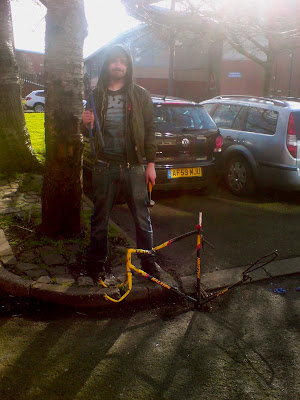 It's all fun and games till someone hits their thumb with a hammer. Fuck the world, listen to death metal and just do whatever the fuck you want, who cares anyway we're all just going to die in the end anyway. Loose the fucking plot. Either the horse gets you or it doesn't. There's no certainty, I could get trampled today or tomorrow or any time, it could be a horse a car or a pissed off sheep, the only certainty I have is that when ever me and Scott get together it's a fucking blast.