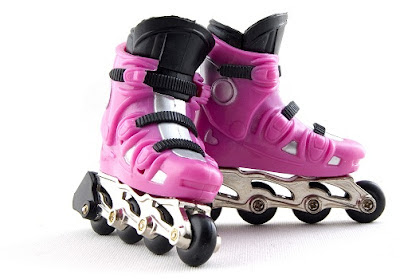 I watched this documentary about the history of rollerblading called Barely Dead while inocently doing research for some writing work. I've never really watched much rollerblading, the sport has a gigantic stigma and wackness attached to it, and I had avoided it because of this. There's a huge overbearing theme in Barely Dead about how Rollerblading is viewed in the public eye. There's some early footage of ice skating style pirouettes in pink Lycra and the much wackness in the awful and directionless roots of the sport, just like any sport in its infancy I suppose, but the blading quickly turns into modern aggressive rollerblading. After watching Barely Dead I felt genuinely sorry for the roller blading scene, after being in the Xgames in 96 and onwards for a few years it was subsequently dropped, this started off a downward spiral of popularity reaching the state rollerblade is in now with absolutely no money for pros, video budgets or contests.

Rollerbladers get bullied by skaters and BMX riders, their sport is viewed as the lowest form of shit, and it obviously hurts the rollerbladers involved to hear this shit talk. This is why I felt sorry for these guys, imagine if you had something that you were so sure was rad and you loved it 100 percent and put everything you had into it and you risked your life on massive handrails and gaps everyday and all anyone outside of the sport ever did was take the piss out of you for having banana boots or whatever. It would suck to have that level of disrespect thrown at you. 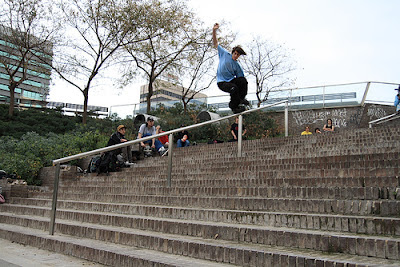 I've been on both sides of the fence in the past, I have mocked Rollerbladers but not unfairly, I also mocked BMX riders and skaters and every other unlikely freestyle street riding genre. I also used to ride with a few rollerbladers back in 96 and 97 when they were the only other dudes in my town who were doing handrails, we had handrails in common and thus we ended up sessioning together. These sessions with Adam and Wayne back in the day were usually productive and enjoyable. I think it's easy to hate something that is different, especially when you stand shoulder to shoulder with others who do what you do, be it bmx, pogo stick, snake board or whatever, in a group you will band together, feel strong and eventually pick on those who are different.

The plight of the rollerblading scene being continually viewed as total shit is a hard one to swallow for those involved and the rollerbladers certainly and in all honesty justifiably go on about it a fair amount in Barely Dead. One of their justifications for rollerblading being a legitimate sport was that it was invented miles before any of the core sports. BMX and Skateboarding appeared in the latter half of the 20th century whereas rollerblading or in line skating dates back to the 1700s, predating surfing even. Yeah rollerblading is old but old sports generally age badly just like that old sport Buzkhashi from Afghanistan where you have to throw a goat carcass at the opposing team.

Personally I don't have a problem with rollerbladers but that is easy to say now that there are non of them left, if this was the late 90s I'd probably want to strangle them for clogging the park and getting all the spots turned into a bust. I suppose in many ways today's rollerbladers are microscooterists. 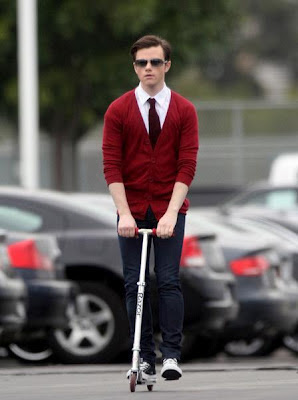 I think I just came out and said in not so many words that we should be tolerant of microscooterists because those using a micro scooter are obviously totally down with their sport, totally committed and just out on the street getting rad and doing what they love.

I think the problem BMX riders have at a deep seated level with the scooterists is that with every scooter sold less money is going into bmx. Chances are a scooter kid would have bought a bmx or  a skate board (I doubt they would have bought rollerblades but who klnows) if scooters weren't around and that money could have gone mostly back into the sport by way of long established well meaning independent bike or skate retailers. The money finds its way back to the bike or skate companies who usually do rad videos, put on tours and contests which are all positive things in our respective sports. Microscootering sucks because it makes other sports less rich, and then bike or skate companies cant afford to pay their pros who instead have to bend over and get paid by wack as fuck energy drink sponsors.

I'm trying to say that we should be supportive on microscooterists because they know not what they do and at the very least they're grinding stuff and getting rad in their own way, just like rollerbladers did 10 years ago, but the words just don't want to come out of me. Rollerblading is still much more rad than scootering but in 20 years time which will we remember? My money is on rollerblades.

Next time you see a scooterist or a fixed-gear-freestylist or a rollerblader (unlikely I know, but just in case) try and be supportive, or at least let your criticism be constructive, we all chase roughly the same goal in life, we just choose different and slightly more impractical and socially unaccepted ways of doing it. The common enemy is not each other, it is THE MAN after all.

If you want to know more check the Barely Dead documentary its a good watch, there is some death defying rollerblading in it and some jaded opinion and some laughable wigga fashion, sounds a lot like South Shields back in the day.