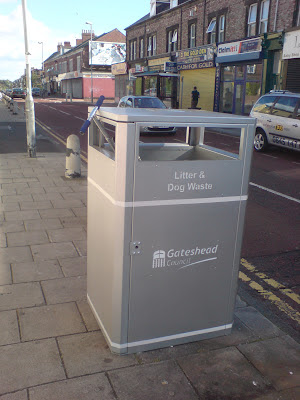 I spotted this on Coatsworth Rd in Gateshead, I was hopeful that it was more than just a sign of our current throw away consumer structuring of society, where nothing has a value for more than five minutes, I was hopeful that this was more of a telling sign in a change of attitudes amongst the youth. Is this the turning point where the young realise the inner plight of the micro scooter and start binning them, just as the suffragettes burned their bras in defiance of male dominant society have the youth taken to destroying scooters representing as they do the worst of valueless commodities who's only value is conjured from thin air by clever marketing techniques. How the young can latch on to an idea thought up by some suit and run away with it, it takes a more mature mind to look though to the core of the problem and think, is scootering actually any good? 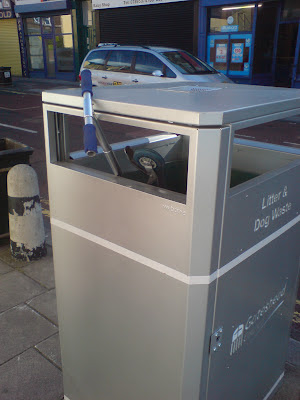 This scene of the binned micro scooter reminded me of many crests and turning points but what came to mind most strongly was the scene from War of the Worlds where after enslaving the human race, and destroying every major city in England and possibly the world and covering the Earth in the quick growing red weed, the martians suddenly and seemingly without providence go bonkers, they act irrationally and some of the tripods go out of control and then grind to a halt. A turning point for the human race, what's left of the martians gets picked apart by birds, the martians hadn't earned their right to our planet as they had no immunity to our diseases, a right we had earned through millenia of evolution. Have scooters earned the right to ride the skatepark yet, their evolution has been highly inconstant. 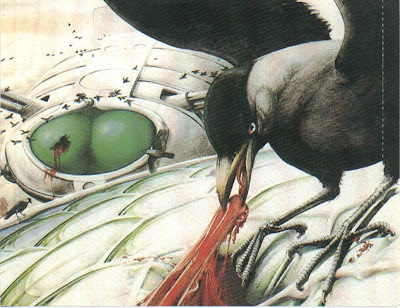 Its more likely just a discarded scooter but it could be the start of some sort of mass migration of thought within the yoof that's all I'm saying, remember scooters have disappeared without a trace before. Many many times.

Ask any 16 year old if they have even heard of a scoot tech or scoot X as they were known in Newcastle and I recon it'll be a no.

I don't know why I brought this all up because I'm supposed to be the new christ of tolerance when it comes to forms of street freestyle, and I've made a bit of a fuss out of a thrown away scooter.
Posted by Olly Olsen at 10:06