Flatland BMX has been popping up a bit more in recent years, it's always been massive in mainland Europe and Japan, but has been very underground in the USA and England. When I first started riding properly in 1993 the scene in South shields was a split of flatland and street, most people crossed over but there was probably almost 10 super dedicated flatland only riders. My younger brother Vince was one of these flat only dudes. 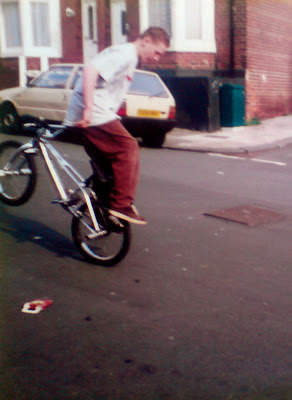 I found these photos the other day, I took them in my Mams front street to finish off a roll of film I was using for a project in my first year of college so it must have been late 1995 or early 1996. Vince was seriously into flatland. 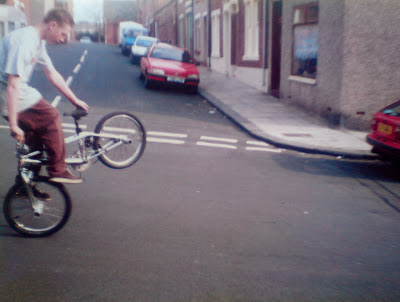 He rolled and scuffed a few moves on less than perfect hilly and rough tarmac conditions, here he wheelchairs right down the street at speed. 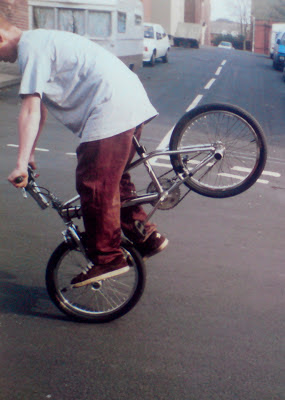 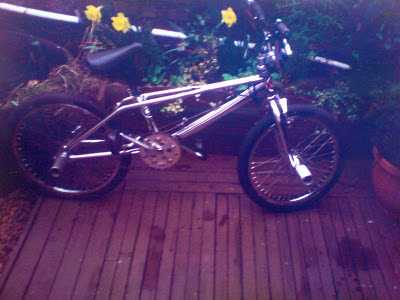 I had a grainy picture of his bike too. Haro Master with twin top tube, its hard to tell from the photo but I think this was around the time where he had modded his dragonfly bars with a crossbar rig then hooked into the gyro cable so that both levers worked both brakes for barflip stuff. Looking at all this made me wish he had kept riding. 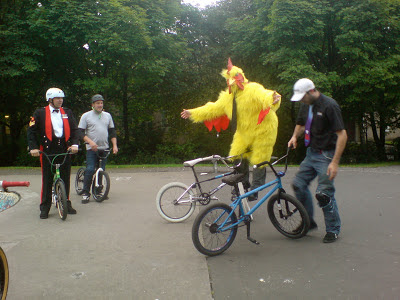 Mega Mark Langston was a massive influence on the South Shields flatland scene, even though he lived in Harrow he popped up regularly to ride and visit his Mother. He was the older guy who helped inspire the younger dudes and scare them with his regular fits of rage and abusive outbursts when tricks or bike parts were not going his way. Here he is still riding flat albeit in a chicken suit 6 weeks back for breakfast club at Exi Park. 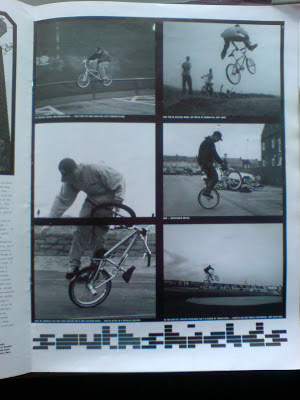 The August/September issue of Ride covered the South Shields flat scene in 1996. Kyle Heslop is doing a switchbitch at the sea front basketball court, he made a video as a college project around this time called C-Dubs it had some pretty impressive flat stuff on it and some dickey flatrail action. Unfortunately its not available online an I don't have a vhs copy of it. 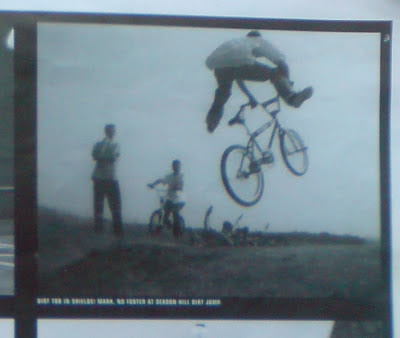 I rode flat but street, ramps and dirt too, our bikes were scrappers so we got dubbed street by the rest of the dudes. I got background in this photo of Marc Bell, I'm rocking an XL white SandM T shirt and a pair of GT 4 piece way before Scerbo did. 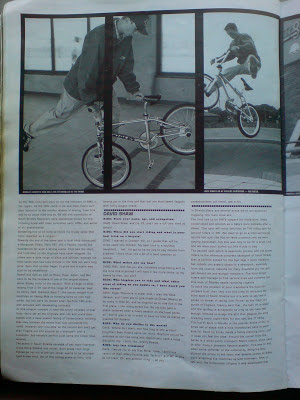 Dan was a super good Flatland rider he was the Paul Osica of our scene. 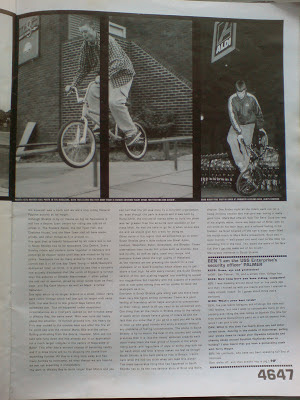 Greavsy that flatrail spot I was on about is this spot that you couldn't find, the Afterdark night club is in the background, home of northeastern happy hardcore.

I never felt that I fit into the flat scene, I couldn't be bothered to keep my bike that clean, these dudes regularly polished every spoke on their bikes with chrome cleaner. It was happy and progressive times though, I had decades down, loads of front wheel links, rolling whiplashes the lot. Grinding handrails was just a lot easier to learn and to be honest a lot more fun, so I sort of forgot about flat. Soon after the article in Ride came out most of the flat dudes got old enough to drink and they all just give up in the space of a few months, its like they were just waiting of a day when they could do something better. I hated lad culture and drinking in the town with a nice jumper and some shiny shoes on and couldn't understand that they would trade this awesome thing of BMX for something so lame and so common place. Gutted. My brother vince sold his bike and bought a staffy and a radgee jacket with the money, I don't think I've ever understood him less than the day when he did that. We all do the things we have to do or feel that we have to do I supose. I really wished he hadn't sold his bike though, even to this day.

1997 was a transitional period between this early flat scene and 98 when I started to ride with the Sunderland scene and what would become the NSF. Through 97 I remember building plenty of dirt jumps but also making a point to be at the skatepark everyday as I had a totally real fear that if other riders were there and I wasn't they might also think the scene was dying out and might not bother the next time. Subconsciously I was the scene, trying to be a rock and hold it together, I loved it and I didn't want it to drop apart and be eaten by the monster of pub culture. Some of those beliefs are still with me today in a more diluted form, I still can't bare to see BMX fall off.