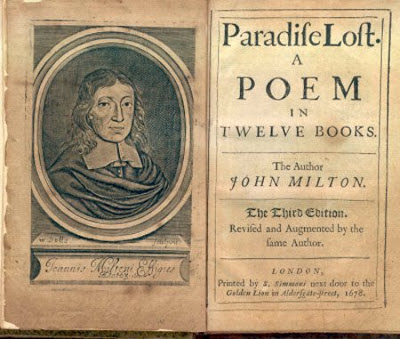 I'm reading John Milton's Paradise Lost at the minute, I picked up a super nice and suitably aged copy from Barter Books in Alnwick. I've always felt cheated by my 1980s and 90s education in the schools in South Shields, we never read the classics, we flirted with a sniff of Shakespeare for 2 or three lessons and then it was back to Gregory's girl, and other such rubbish. When I started to travel a bit and talk to the people I met along the way I realised that education is not the same where ever you are, many of my friends had studied stuff that I think I would have found very interesting.

I was always interested in Greek gods and Mythos but we never learned or read that stuff in school even though seemingly everyone else did, I had to buy copies of Homer's Iliad and Odyssey and force myself through them, I learned of the ancient greek tragedies through the Theban Plays by Sophocles which are infinitely easier to read than Homer and I finally found something that I thought I should already know.

The question still burning was why wasn't I shown this all in school? Given that Western culture and both moral and judicial law is based on the Bible and Christian doctrine I can see why we would study christian religion in Religious Education at school. Surely the Greek classics are second to this when it comes to the very core and beginnings of civilisation, Plato's teachings of philosophy and science I learned through ragged and dog eared paperback volumes bought for 25p from Black Flame books in Heaton not from my structured eduction at school. And when it came to knowing anything of english literature further than Charles Dickens I was lost, I don't think we even read a whole dickens novel only excerpts.

So anyway, If I learnt anything from my school education it was this: it isn't given to you on a plate you've got to get off your arse and go and learn it all yourself. Disappointed is the best way to describe my thoughts with what we studied in school. I didn't even feel like I was led in the right direction. It wasn't till I was in my 20s where I began to study the classics but with only wikipedia as my teacher and aid, it has been a tough journey.

I'm really enjoying Paradise Lost it's full of wonderful and eloquent poetry about the underworld and Satan. A phrase hit me last night that seemed out of place and one that I associated with the modern world, the passage went thusly;

"As with a rural mound, the champain head,
Of steep wilderness, whose hairy sides
With thicket overgrown, grotesque and wild,
Access denied."

ACCESS DENIED, it sounds so modern for something that was written nearly 400 years ago, it stood out from the page as something I associated with computer passwords, and LED numerical pad language from thick vault-like doors in the sides of underground nuclear attack bunkers, not something from 17th century English literature.

I most closely associate the phrase ACCESS DENIED with the 1990s straight to video virtual reality and Pierce Brosnan movie The Lawnmower Man. The final scene where Jobe (now cyber Jobe) has finished with his telekinetic rampage in the real world and has managed to metamorphose to full electronic power within a completely virtual world. Jobe is frantically trying to escape his first  construct and birth chamber where he became completely electronical by choosing hundreds of thousands of algorithms in the hope of finding the one that allows him out onto the internet and in turn into the homes of everyone the world over. With every algorithm solved but proved to be the wrong choice he is met with a red hexagon and the words 'access denied'. The computer effects are laughable in LawnMower Man by todays standards but at the time They were mind blowing.

I had a pre release poster for The Lawnmower Man hanging in my bedroom when I was in school and across the top it said based on the short story by Steven King, King famously had his name pulled from the promotional materials for the film when he saw what he felt was a poor and badly altered version of his story.

I wonder if in some impossible time dimension jump if John Milton could see how his phrase used in such flash in the pan, pulp and trashy 90s sci fi wether he'd be blown away by the concept of moving pictures, recorded sound, special effects, computer design, modern world ideas of violence and third eye mysticism and even a man getting killed by a red lawn mower. Or would John Milton simply think that Lawnmower man is nowhere near as good as Bladerunner. We will never know.