Recycle The Scrappers/Don't Fear The Reaper.

At work Rob Ford is known as 'The Reaper' I don't know who came up with this name for him, but it has to do with his ability to determine when a bicycle can go no further, no amount of reasonable repair can get it to ride again or it is simply too dangerous to continue riding it, for example the frame could be snapped or the fork or it had been involved in a fire or a road traffic accident. When a bicycle reaches this end it is reaped, by the reaper and becomes a reaper. Sometimes the customer wheels the bike away slowly and nervously while everyone in the shop feels bad and looks at the floor sheepishly. Other times when a customer realises their bike is not viable for repair it gets dumped upstairs for a year while they promise to pick it up. These 1 year old dumped reaper bikes need to either be taken to a metal recycling plant or salvaged for parts which when combined become whacky scrap heap challenge bike for people to mission to the shop, pub or town on in horrible North East weathers. 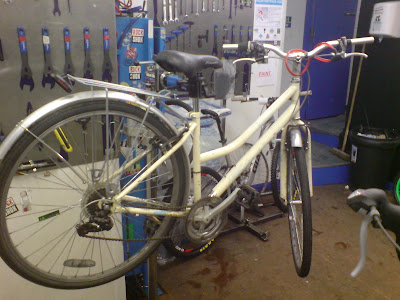 First up was this steel Falcon Richmond, the hub on the back wheel was completely destroyed inside, the gearing system was worn out, both the grip shifters were wrecked and hanging off, brake cables were rusted solid and the whole thing wasn't worth shit to begin with. 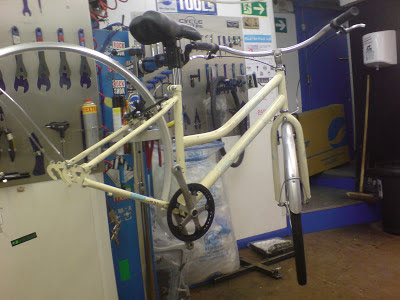 I stripped all the broken stuff off and all the stuff that wasn't going to stay on like the pannier rack and the old riser bars and tatty stem and lock. I cleaned up the frame and forks, I fitted a huge pair of cruiser bars and zoom stem from a Pashley that had had its rear end crushed under a car, I re-cabled the brakes and fitted new pads, I also fitted an old Shimano road chainset with a 2nd hand Alfine 46t chainring and trouser guard. 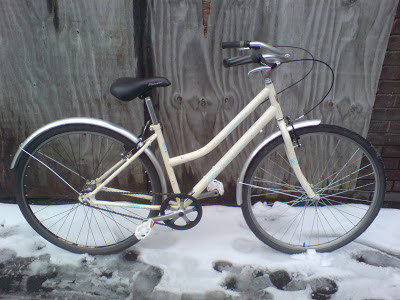 I had to build a wheel out of a scrap road rim and a high flanged rusty chromed screw on freewheel hub from the 70s with recycled black spokes. I fitted an 18t freewheel off one of Cairnsies old wheels which still fill the loft. I was pretty happy with the finished build, it rode like a summery sunday afternoon dream down the quayside even though it was minus two and it was snowing in Byker. I think this bicycle is going to end up being my sisters bike. 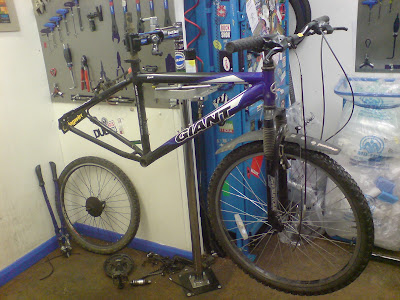 Next up was this entry level aluminium Giant Rock from 7 to 10 years ago, I had to strip this thing entirely because besides the frame there was nothing to salvage off here at all, literally everything was ruined filthy bent rusty seized or perished. The seat post put up quite a bit of resistance to get out but other than that the bike flew apart. It was almost as if the bike was sick of itself and wanted to be destroyed and rebuilt like some kind of rusty phoenix. 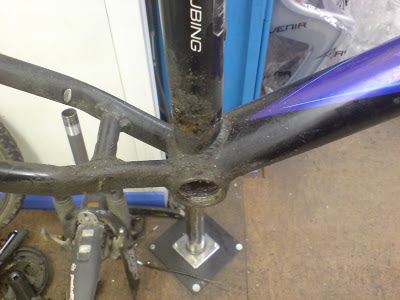 The level of rust grime and road film on this thing was super thick and had to be cleaned off. Note the wear on the chainstay where the wheel has been sitting to one side. 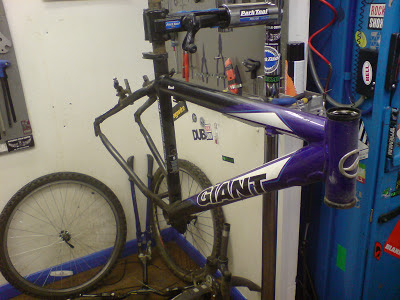 The Giant Rock frame is cleaned up here and had everything but the headset cups and the rear brake removed. I subsequently removed the back brake also. 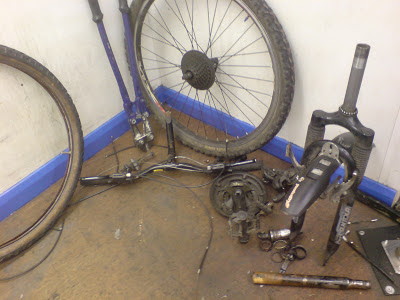 Pile of removed stuff that was all filthy and broken. 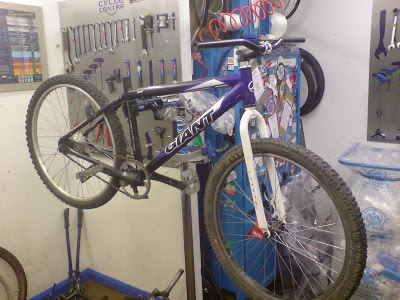 In this under construction photo I have fitted a pair of chromoly 410mm suspension adjusted rigid Genesis forks, a franken-headset, a stem off of Carmines old JJB full suspension bike and the steel risers off the original Giant Rock. 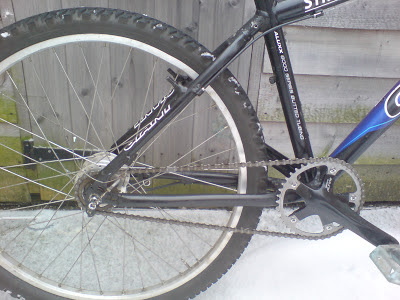 I've had this 5 speed Sturmey Archer Sprinter wheel lying around for ages knowing that it would fit on something eventually, so it was a bit of an experiment to fit it in here. I fitted a battered hollotech 2 Alfine chainset with a 42t ring to hopefully magic gear the set up because this had vertical dropouts and  no way to adjust the chain tension and luckily it worked first go. 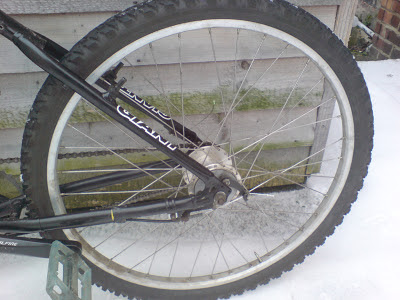 The Sprinter hub also has a lever actuated hub brake which needed to be ghetto bracketed to the chainstay. 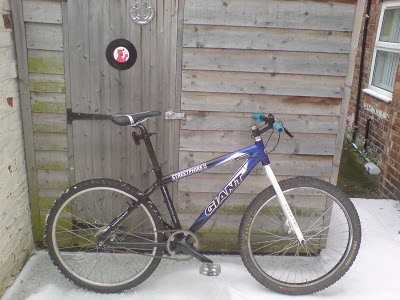 Finished bike shot with a new Streetphire sticker to advertise some website HMAN is doing. I rode the bike through the snow today and it performed pretty well. It is absolutely the lightest MTB I have ever ridden, this amazed me due to the low quality of many of the components and my experiences of other gear hubs like the Alfine for instance which weigh a ton. The 5 speed hub had an awesome ratio range that worked with the 42t chainring and relying on the single rear hub brake initially felt super sketchy but it did work good enough to lock up and skid the bike so what more do you need. The brake screeched like hell at one point and I could imagine it smoking under a descent like some Clunkers Repack shit. Altogether the bike rides really well, but I wouldn't trust it much further than I could throw it, it'll have to prove itself over the next month before I can trust it.