Black Tshirt of the Week. Week 2. 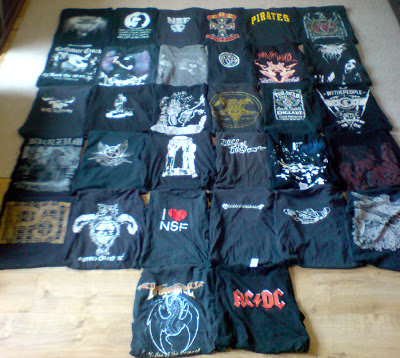 I meant to start this up ages ago but could never be chewed to get into it. I began thinking about a black Tshirt project back when I was doing Whickhamlifeinthewoods, so I guess you could go here to see the first instalment written almost 2 years ago.

I wear a lot of black Tshirts, my wardrobe is sort of monochromatic, I only really have a few different styles of things but in some cases like jeans and Tshirts I have a lot of really old ones that I wear for decades. Other times with stuff like trainers I wear them out in a couple of months and they get launched in the bin with soles totally destroyed.

I only realised how many largely identical black Tshirts I owned one summer when I was homeless for a couple of weeks and had to return with all my stuff back to my mothers house in South Shields. I used to be pretty lazy when it came to washing clothes back then and as a good mother seconds after I walked in the door of her house she started telling me to get a bath cut my hair have a shave and not put my cup on the table without a coaster, as this endless flow of suggested improvement to my lifestyle filled the air she spotted my clothes in two bin bags and took instantaneously to washing them. I'm sure in my heart of hearts I said "you don't have to wash them, I'll do it". But in reality I probably just stood back and thought 'if it makes you happy for me to have clean clothes that you have washed then carry on'. I'm a bad son. 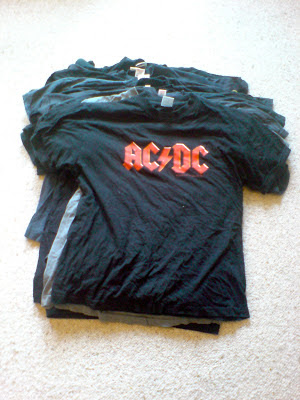 The reality of my focussed and single mindset wardrobe struck home when I saw all my Tshirts together hanging the length of two full washing lines and also on many radiators throughout the house drying, all being seemingly black with some kind of skull motiv. 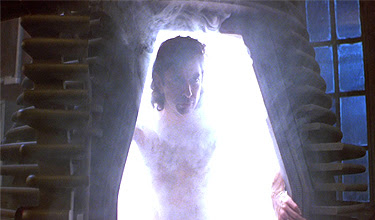 I was reminded of Jeff Goldblum's character in the excellent remake of THE FLY by David Cronenburg, Goldblum plays an obsessive scientist working on a teleportation system, Geena Davis his love interest asks him if he only has one set of clothes as that is all she has ever seen him in but Goldblum reveals a wardrobe with numerous suit jackets shirts and pants all identical, his reasoning for this is that he doesn't have to think about what to wear and waste valuable brain power on doing so he just picks the same stuff everyday. Apparently this was lifted from how Albert Einstein used to dress, I'm guessing it must work then. I'm not sure my reasoning for having all my clothes look the same is quite so elegant, maybe I'm stuck in a rut, maybe It's my way of blending in to the background, maybe it's what I feel comfortable with or maybe it's where I ended up from out of no choice of my own as a lot of these Tshirts either came to me free or were donated.

Looking at the picture of all these shirts what strikes me first is that I don't and never have owned an iron.

I wanted to get a better shot or angle of all my Tshirts layed out on the floor but seconds after I took the first one the cats decided to start playing around in them. 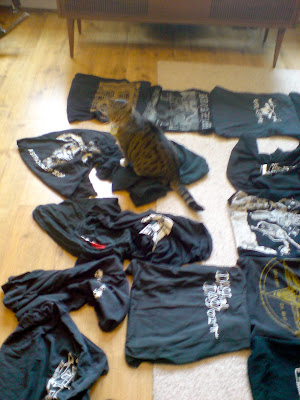 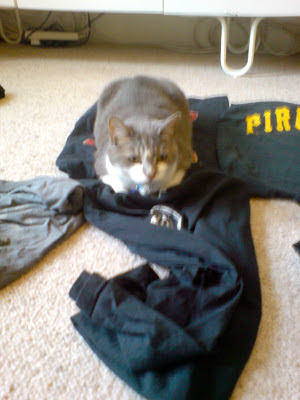 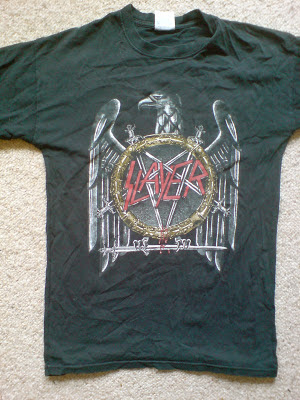 Can you call yourself a man if you haven't at some point owned a Slayer Tshirt? The quintessential aggression band, the finest thrash album ever in Reign in Blood, legions of dedicated fans carving slayer logos in their arms and setting them on fire, blood sweet tears and more blood, a band for the 80s youth to channel their dissatisfaction with the world and all its hypocrisies and shortcomings and travesties through music. Slayer saved a whole generation of metal heads, they literally stopped swathes of kids from going mad. After a day of your boss telling you to mop the toilet floor, or your teacher giving you shit for not doing your homework or the bizzies picking you up for smoking weed in a bus shelter all the worlds bullshit lies on your shoulders and slowly grinds you into the floor. You get home dejected and sick of the world and all its inhabitants you walk upstairs you turn on the stereo you crank it up to 11 and then slayer rights all the wrongs in your world. 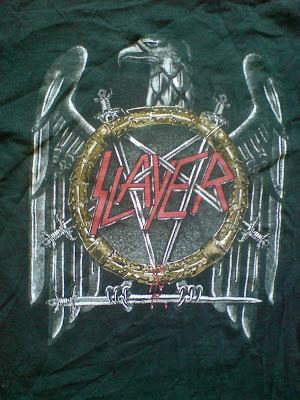 I've owned various Slayer Tshirts over the years but this is the one I have now, it was donated to me in its XL form by Hairy Dave past employee at the cycle centre. The logo is as demonic as it is fascist, satirising all the wrong that ever existed in the world. What more could you want. I pulled this shirt all apart and took it in because it was way to big for my skinny form. 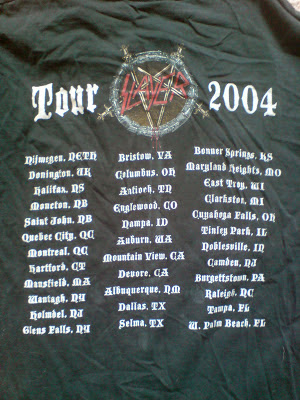 I'm pretty sure dave got this Tshirt at Donington download festival in 2004. The only time I ever saw Slayer was in 1998 at the Ozz Fest in Milton Keynes, they blew my head off, my rip cage got rattled by the drums, the pit was exceptionally feisty and I got a trampled in the mud.

Slayer shirts are still pretty prolific among metal heads and given that slayer are not really on top of their game anymore its impressive. I'm glad the slayer shirt never went the way of the Motorhead shirt and was available in Topshop with glitter and sequins stuck to it for fashion reasons. The slayer shirt is still  the preserve of true metal heads and may it always be so. 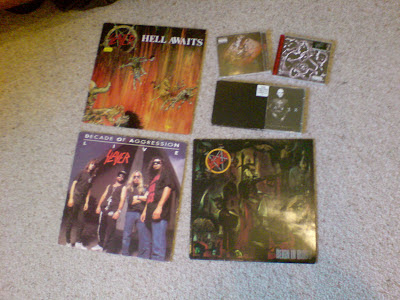 Slayer albums, mostly charity shop finds believe it or not.

Final word is if you think you are a man and you have never owned a Slayer shirt, have a word with yourself and maybe its time to buy, borrow or steal one.