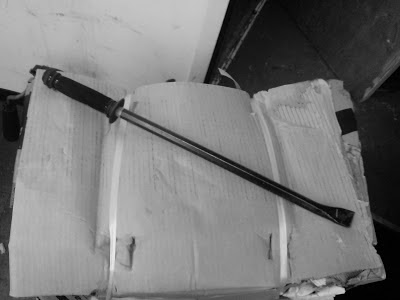 I was messing about a couple of weeks back trying to make our crowbar a little safer and a little more ergonomic. We always use the flat or splayed end and never the pointy end. When using the splayed end to tease cardboard out of the bailer the pointy end is really close to your head at eye level. I definitely don't want that steel point in my eye so I covered it up with reams of tape and a BMX grip and barend.

After this modification the crowbar was perfect for the job. Another upside was that it now felt like an awesome ninja weapon, even the stiffest of straight laced people who held it were intoxicated by its power. At first the sides of their mouths turned up a little, then a full blown 'yes this is amazing' smile and then seconds later they were masquerading as some 16th century ming dynasty samurai warrior plotting the demise of a corrupt emperor on a windy lonely mountain top.

The effect of holding the crowbar was that of holding any legendary weapon be it Arthur's Excalibur, Thor's Mjolnir, Poseidon's Trident, Vishnu's Sudarshana Chakra, or Blain's mini gun, it basically tuned you into a five year old mock hacking your way through countless invisible adversaries in slow motion out of the work shop and on to the top of the castle to save and eventually lay the princess.

After a bit of time thinking about and using the super crowbar I realised I had also inadvertently created the finest skate stopper removal tool ever. Beware Newcastle city council I'm gunning for your prized ledges.
Posted by Olly Olsen at 16:50