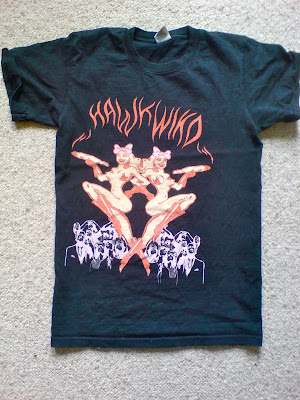 Have you seen how wonky the design is printed on my Hawkwind Tshirt? And this thing is official. The screen printer must have been sky high on Orgone infused magic mushrooms that day. As with anything to do with Hawkwind the design is totally crazy, featuring two naked other than jack boots pin up girls holding comedy oversized spliffs. The girls are orange (like most girls at the bigg market) and have maniacal looks on their faces. Below them is either a mongrel and stoned and zoned crowd at a gig, a demonic rabble of paparazzi snearing and salivating at the up skirt, or a strange race of chimeric animal people in suits, I'm imagining a gentrified island of doctor Moreau. 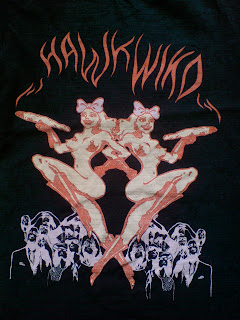 I got this shirt when I went to see Hawkwind in either 2009 or 2010 in Newcastle, for a band that has been going for 40 plus years they still rocked pretty hard and mixed elements of modern trance and tribal percussion in seamlessly with all their old classics. I say classics Hawkwind are a band unto themselves. People either know that one song silver dream machine, or maybe they think they know something you don't and they tell you that Lemmy was in Hawkwind back in the day and then he went on to form bastard which would eventually become motorhead, or they tell you everything about hawkwind and have memorised every of the 60 or more line up changes since the late sixties boring you at a party for 3 hours only to finally arrive at the same conclusion of all fans that Space Ritual was the best album. 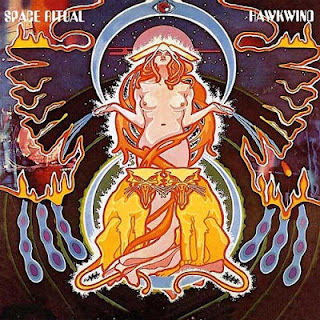 Space Ritual is Hawkwind's best album I learned this from reading online reviews just like everyone else under 50 who has any knowledge of the band so stop trying to impress me at the gig, we can all read wikipedia, discogs, pitchfork, wire and countless other online musical sources without ever leaving our bedrooms. Now that being a nerd is so easy it takes all the weight information like that once held and leaves the common man in a strange limbo of over educated listener and naked and uninitiated superfan.
I bought my space ritual record (yes a real tangible piece of media made of vinyl and cardbord that when combined with many other pieces of physical media makes up a record collection which sole use is to make moving house exponentially more difficult) from Old Hits record shop which has now closed in Newcastle. As I mentioned just before I knew Space Ritual was Hawkwind's best album capturing them at their whacked out sci fi peak. I saw the battered vinyl copy in Old Hits and took it to the counter, the guy who worked there looked like a cross between a disenfranchised Nam vet, and a spill over from the glam rock party scene, a dry white crust forming on his lips, his brain trapped in an endless acid flash back, images from Haight and Ashbury ticking over behind his eyes, images of naked graveyards and penguin migration, images of a man with a trout for a face, imagery impossible to remove no matter how hard he presses his backy coated thumbs into his eye sockets while wishing for home.
I said to the shop owner holding record in hand "does this thing play alright it looks quite battered?"
He looked over his silver rimmed dark glasses and said "why yes it does my young fellow"
I thought I'd put my wikipedia knowledge to the test "I heard this was Hawkwind's best live Album"
The record shop owner replied shaking his head and looking at the grotesque 70s nylon carpet then raising his gaze to look at me momentarily "this is the best album"
I smiled "you rate this as the best Hawkwind album?"
The longhaired efficianado sucked long and hard air over his wisened and transparent yellow tobaco teeth as only aged shop owners can, he stuck out his thin and sinewy Mick Jagger chest which was covered in a vintage striped vest and said "this here album is THE BEST ALBUM EVER and you had better believe it"
I felt I was stuck in an episode of Saxondale, the shop owner went on to regail me of stories of drug induced comatose at gigs roadeeing for the band, which members he liked, which he didn't, what they ate for dinner, what they drank, how many girls they did or didn't get with, how they experimented with the bassoon, how the bus dispensed LSD impregnated candy floss from leather gas masks that everyone was forced to wear while they channelled mystical life energy from the cosmos with their sexual organs. Well he might of done, after 2 minutes into his lengthy outpouring I switched off and everything went in one ear and out the next.

Space ritual is a fucking monster of an album and I highly recomend you listen to it in its entirety at a very high volume and prefrably from an analogue source.

Orgone accumulator is one of my favorite Hawkwind songs. When I realised what an Orgone accumulator was a few years ago the concept blew my mind and had me laughing for weeks, no wonder we have people believing in scientology and creationism, all those impressionable minds took drugs and listened to shit like this in the 60s and 70s no one could have predicted the outcome to be so lame.

Heres a cut and paste on orgones from wikipedia for shear laziness and also to keep with the theme of this post.

Orgone energy was a hypothetical universal life force originally proposed in the 1930s by Wilhelm Reich.[1][2][3] In its final conception, developed by Reich's student Charles Kelly after Reich's death, Orgone was conceived as the anti-entropic principle of the universe, a creative substratum in all of nature comparable to Mesmer's animal magnetism, the Odic force of Carl Reichenbach and Henri Bergson'sélan vital.[4] Orgone was seen as a massless, omnipresent substance, similar to luminiferous aether, but more closely associated with living energy than inert matter. It could coalesce to create organization on all scales, from the smallest microscopic units—called bions in orgone theory—to macroscopic structures like organisms, clouds, or even galaxies.

This video takes you through the Orgone accumulator concept.

Funny aspects too numerous to mention but:
The sacred geometry (sounds like something RZA would rap about)
This guy goes to a gem convention (they have those?)
His orgonite mix of iron filings and glue "its beautiful"
Orgonite plumbing right angles
how badly does the wired crystal holder fit under the the capstone? (He obviously didn't study in sacred geometry class)