Skavengers, the unknown history of the sickly bicycle. 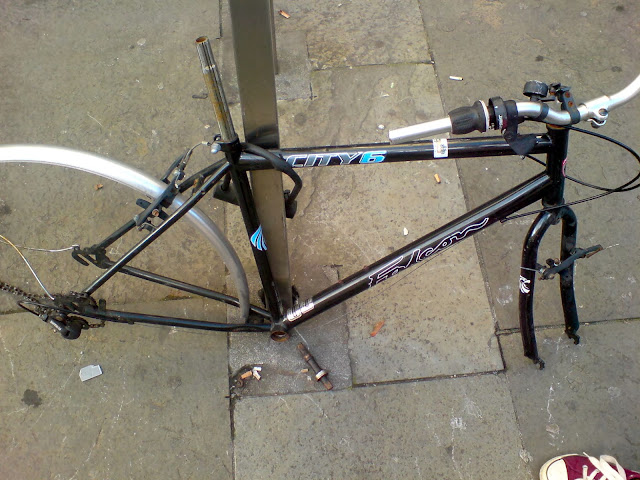 A lot of locked bikes get damaged in the town. A truck backs over your bike when the delivery driver is distracted, your bike's wheels get stamped by drunks over night, someone bends your bars and snaps your brake cable trying to rag the lock off, you get a flatty and the bike is not even worth the price of a new tube. Truth is there's a thousand reasons why you would leave a bike locked in town and not return for it, but I would guess that it is usually down to the bike being damaged in someway and the inconvenience of dragging it back home outweighs the value it has as a bike to you.

These lonely bikes sit out every night slowly rusting away. They're neglected and feel sorry for themselves, they have no voice, no will power and no way home.

Once a bike has been spotted for weeks in the same spot and in the same sorry state, that's when the scavengers move in. First to go is usually the front wheel. Then the seat and rear wheel. Next up on the list of skavenger frequency is bars, shortly followed by forks and stem.

In the above photo the bike which has been locked on Clayton street for 6 months has had the bottom bracket removed. To remove a square taper BB of this type requires a crank puller, a lockring remover and various thin sided wrenches. Invariably a BB of this quality fitted to a rusted Hi Ten steel frame would be a nightmare to remove in a workshop, let alone on one of the busiest streets in town while it was chained awkwardly to a bike rack. A daunting task on the fly.

What strikes me as extra weird is that not only did the scavenger have all the necessary tools and the knowledge to remove the bb, but they then left it lying on the ground next to the bike after it was successfully removed. Was it possible that the scavengers were rumbled by the bizzies just as the job was about to come off, or was it that they realised the square taper axle length was too long and it wasn't going to work on their set up, or was it that they fitted the new BB and what we see lying next to the bike is actually the scavengers old BB and the job had come off without a hitch, new BB installed on the fly. If the last out come is true then these guys need commending.

Whatever it was, the truth about this and a thousand other bicycles locked in various states of disarray all over the North East will never be known.

About the region ageing velo cadavers picked to the bare bones by street urchins and scrap vultures, await a grim destiny, their steel carcasses will rust and eventually be cut away and destroyed. Their history melted in a vast pot, their knowledge bound in carbon and manganese is kept and inaccessible. Their prior riding life is a dark mystery held so closely to the chest by the murky silence of the street.