Let the Cyclist live. (Pedal reflectors and other bicycle stigmata) 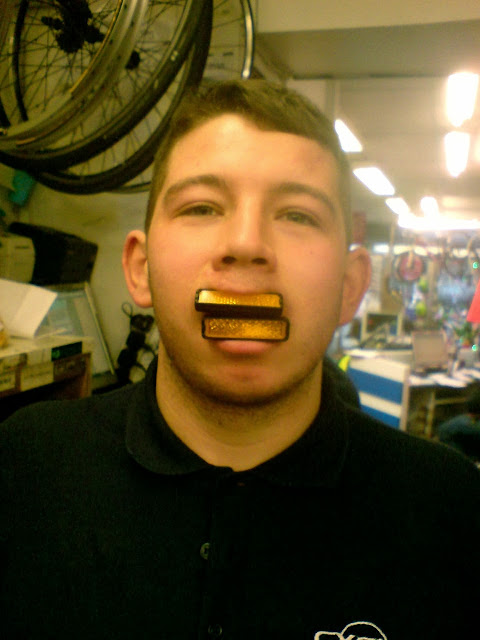 Sweet Roosy P takes time out from his busy Christmas schedule to reflect on the recent change of pedal Legislation in the UK.

I always run from or ignore the Plakkas anyway. What they going to do? Call the real bizzies?

My BMX has a total absence of brakes, reflectors or lights. Is it still 30 quid for a push bike misdemeanour? If so there's no way I'm going to stop and get grilled by the police and then hand over 90 quid. Truth is, I almost never ride my BMX in the dark and if I do I wear a highly reflective jacket and have numerous lights on my backpack and person. I can stop it as quick as any bike with a brake fitted thanks to many years in the brakeless game.

When on my commuting, MTB or road bike I have very efficient and highly maintained brakes and a vast array of powerful lights made by market leading manufacturers. I wear reflective clothing. If you don't see me, you must not be looking.

Pedal reflectors are not going to help my cause of being seen on the road. Fining me for not having reflectors will only server to victimise the minority, a minority who are responsible for almost no deaths on the road and no pollution to the Earth. Fining a cyclist for having no reflectors is only likely to put him off cycling. Cycling as I'm led to believe is good for health and the environment which in turn saves the government money in the long run. Cycling is something you'd think the government would want to encourage.

It feels like in the (contrived and faked by the media) war of motorists versus cyclists, the more cyclists who are killed on the road by cars the more the government want to victimise the cyclist.

How about every car has to have a gigantic soft rubber mattress fitted to front and rear bumper, would that give cyclists a fighting chance when they get mercilessly ploughed by a driver. A driver who was probably smoking, texting, changing the radio channel, fumbling with his ball sack and eating fish and chips while at the wheel.

How about the government makes everything illegal at the wheel other than driving. Would that save a few cyclists lives? I'm inclined to think so.

Stop bullying cyclists for getting killed and injured on the roads. We don't want to be killed or injured. We avoid it at all costs.

Don't blame the cyclist for deaths on the road.

Let the cyclist live.
Posted by Olly Olsen at 22:13