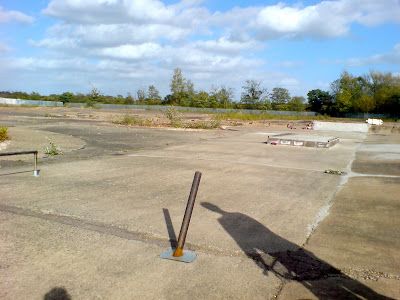 I was witness to a freakish time-space anomaly in Hull. The riders talked of a wastey, they used the name 'wasteland', they even had discussions about whether they thought it was ok to name it that. When I got to this alternate wasteland the vibe was freakish and preternatural. Thoughts of the twilight zone and early outer limits scenarios were whirling around in my head. The Hull-wastey flatbar was considerably lower than newcastle's counterpart but the surroundings, choice of obstacles and surface were largely identical. Their pole jam is welded and fitted much like ours, the manny pad is slightly better because it has coping down both sides, the quater is slightly less well made but is an exact replica in all its dimensions. I've rode carbon copy skateparks before but I could accept them because they were both made by the same company. This Hull spot is terrifying, more than a simple homage it's a carbon copy. Safe Nath, Tom Blyth and the boys who built this have never been to Newcastle either which makes it more likely that there's some fucked up psychic link going on akin to the Tommyknockers or Eerie Indiana or some si-fi shit.

Be afraid be very afraid.
Posted by Olly Olsen at 17:29