I built up a 20"wheel road bike for a good customer a couple of weeks back. The frame is an old Raleigh which has been blasted and powder coated. 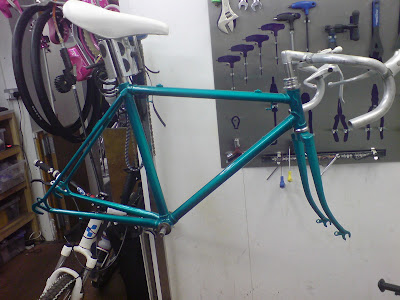 Here I've fitted the forks stem seat and bars, the BB has just gone in and I'm trying to establish lever and gear shifter position as this bike originally came with downtube shifters and derailleur gears but I'm building it up with Sturmey Archer 3 speed gear hub. 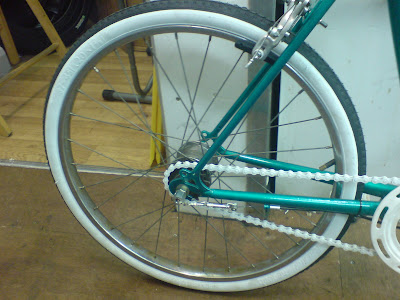 Here's a shot of the rear wheel now fitted with white chain and white wall tyres. I think the Raleigh record white wall tyres make this thing look a bit more shopper than racer but it ain't my bike so I should shut it. 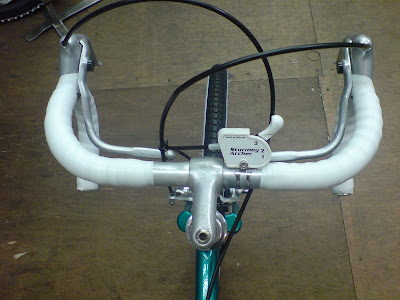 Because of the derailleur style cable routing I had to get creative and fit a Brompton gear cable so I could route it neatly into the enclosed chainstay gear cable stop (the Sturmey cable supplied was sealed both ends and would of ended up looking nasty requiring a tatty old steel frame clamp cable stop). 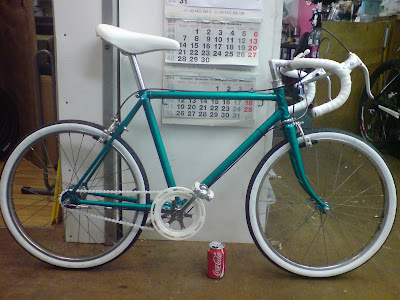 The white grip tape was vintage and had gone off all sticky so I had to clean it down with turps, I hope this little young-un doesn't smoke tabs while riding any time soon. The fizzy drink is placed to gauge the size of this bike, from a distance it looks full size but as you get closer you start to feel like a giant looming over it. All together I think this build came out looking pretty neat. A clean junior road bike in striking colours.  The bike looks oddly similar to the one ridden in the video below and makes me want to get this sort of thing going at the monkey velodrome in Heaton Park.