I was always torn between thinking that the photo casebooks, which Pete and the rest of us put together, were either hilariously funny or so geeky and uncool and in the vein of 90s MTB magazine editorial that I was embarrassed to be involved.
The first one came about spontaneously when we found a piece of expanding foam at the wasteland that bore an uncanny resemblance to human intestines, within five minutes the casebook was conceived shot and in Pete's hands ready for the formatting and captioning. It graced the pages of the now defunct streetphire website and caused a little rift of laughter.
Bancroft suggested doing the photo casebook as a monthly feature in RIDE, I was a little worried at first knowing intimately how jaded and intolerant of cheese BMX riders can be. RIDE magazine's content has always been highly inconsistent in its quality, it's a hallmark of the magazine, but when it came down to it it felt like a pretty whack premise to go in a magazine, I mean yeah it's funny on a local website but to waste time with it in the pages of a magazine that someone had to pay to look at was a little much. If the worst came to the worst I figured I could put all the blame content wise on Pete and get away with it.
I soon changed my mind about the casebooks after a lot of positive feedback when they hit the magazine. After re-reading the casebooks recently I found myself quite proud to have been involved with them. Pete has come up with some genuinely hilarious and pressing issues within the BMX scene and mocked them as only he can.
Pete has been keen to get these up on line so here they all are. I've set up an archive page as they're a bit hard to read on the blog. You can read them full size here. plus I've given a bit of a run down on each one after the jump.
1. Dangerous bar-ends/accidental appendectomy.

I'm pretty sure this one was inspired by a little incident we had in Pete's car on the way to the Dub Jam in Liverpool when an overloaded bike rack caused the rear window of the car to burst through, covering Marc Bell and I in broken glass and scaring the shit out of us as we sat on the back seats. The car still made it another 100 miles after we rejigged the rack to work on the parcel shelf. 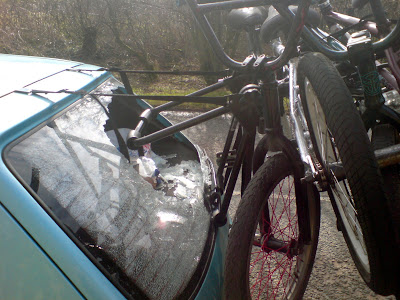 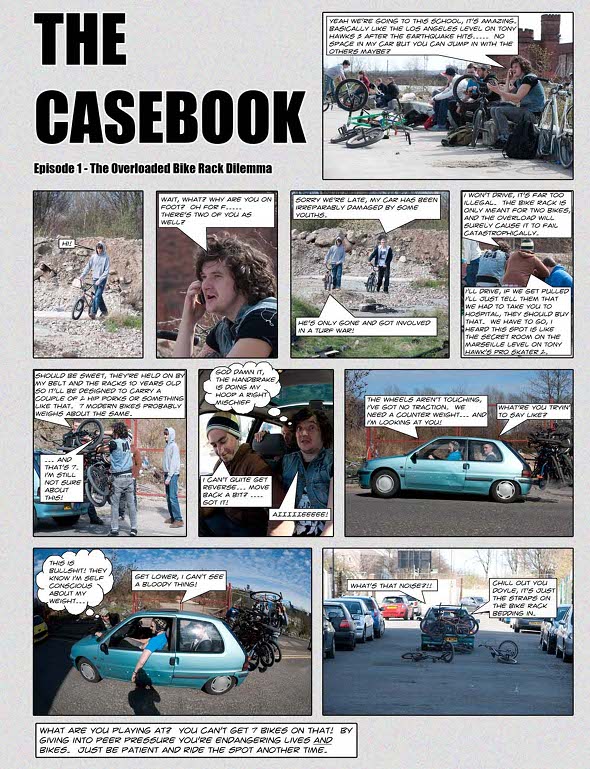 At the time of this casebook's inception tiny stand-overs were getting even smaller in BMX. Every frame comes in 9 inch stand-over this year, but the fickle BMX buying public of yesteryear wanted Micro scooter inspired frames. It's fucked that now micro scooters are actually filling parks like a plague of wheel bound and entirely clueless locusts that BMX riders have suddenly re-embraced the high stand-over in joint hatred of the scooter fools. How the winds change. 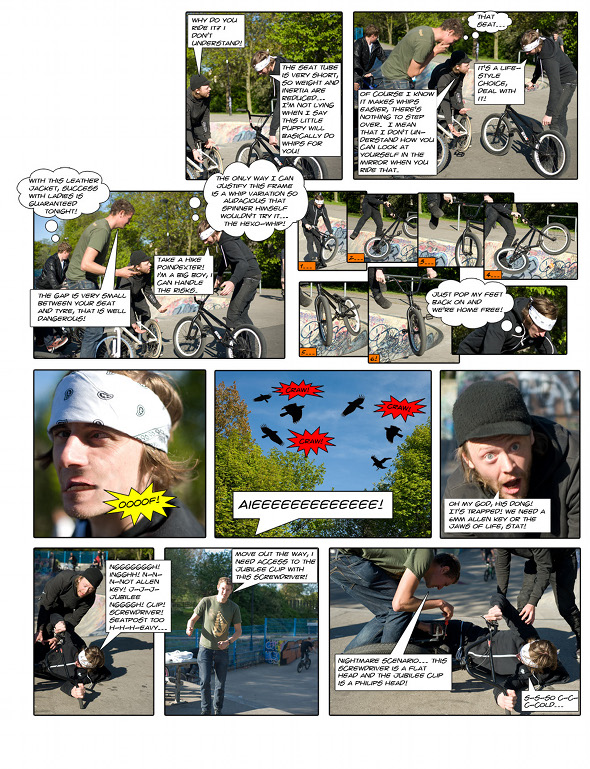 4. Prunetang!
Energy drinks sponsors run the big end of BMX. Not a lot of people would get paid without them. It's a bit of a shame, I feel outraged that something so core and pure like BMX has to be diluted by these conglomerate and corporate giants who are out for the quick buck seeing the riders as nothing more than a fast moving extreme bill board to advertise what is basically an unnecessary product. I don't drink energy drink, I never have, DO YOU?
The flip side of things is that companies like red bull put on awesome events that would never happen otherwise. Yes energy drinks are evil but also yes the Empire of Dirt ruled, so what do you do? BMX would probably be fucked without energy drinks, the riders certainly would be, no one would be making bank and everyone would have to have a real world job, shit would suck, it sucks either way.
If I ever did drink an energy drink it would definitely be Prunetang! 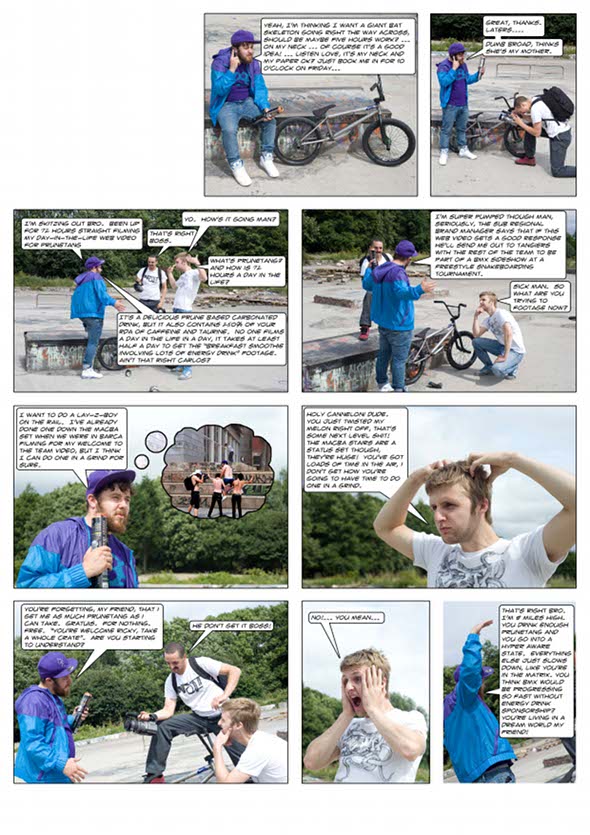 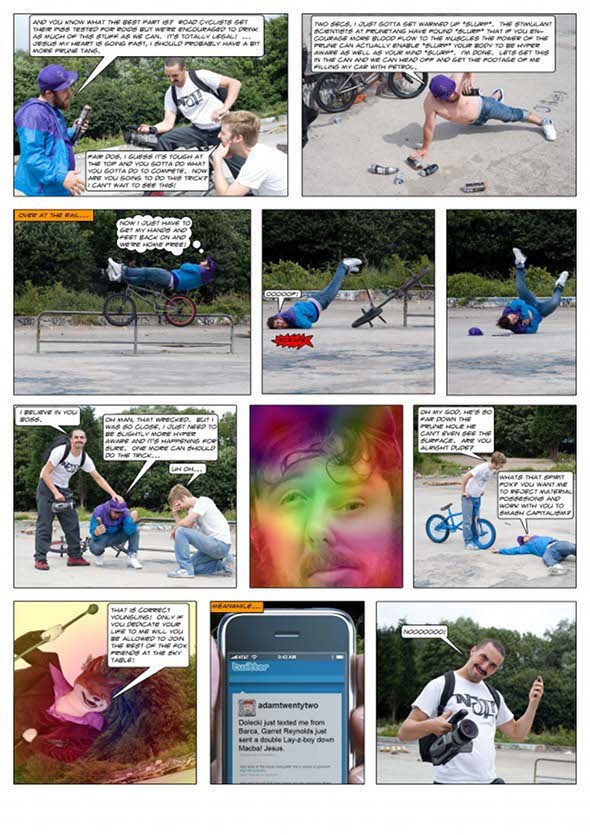 5. Message board comments retribution.
Message board comments are an open source for insult, racism, criminally stupid views and opinionated garbage. There is some genuine and interesting debate going down on the Internet but because you have to trawl through a thousand comments of absolute fucking horse shit, more than likely your never going to find it. I will say this, Kids, I know the pros say that negative comments don't hurt them, well they do, Pros are real people and horrible insulting slander hurts regardless of what position you're in or what tricks you can do. I could say 'Think before you type' even though I know you won't. So fuck it. Real life retribution for on line comments rarely happens but sometimes it does, BMX is small, if you're with it for long enough you will end up bumping into these people and chances are they will remember. 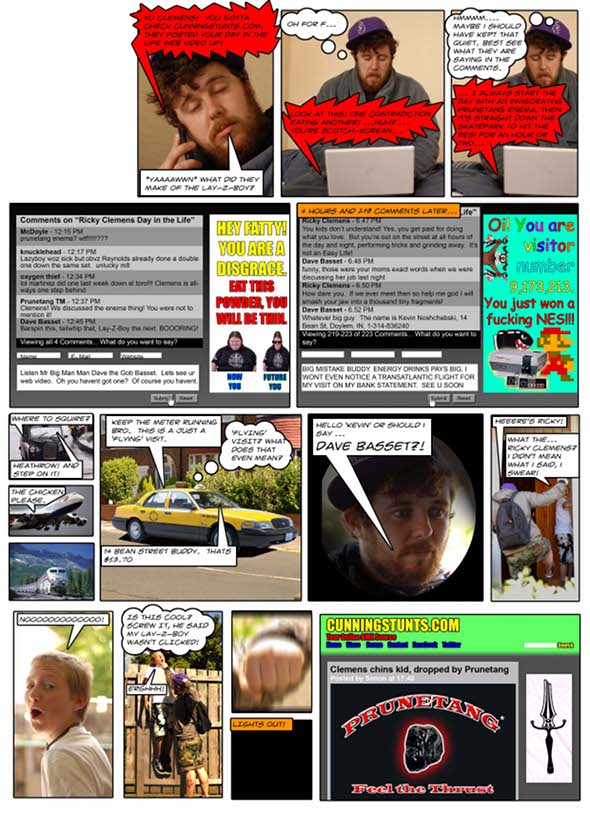 The end of the photo casebook or not, pete has a plan for a new one but who knows if it'll come into fruition?
Posted by Olly Olsen at 19:04