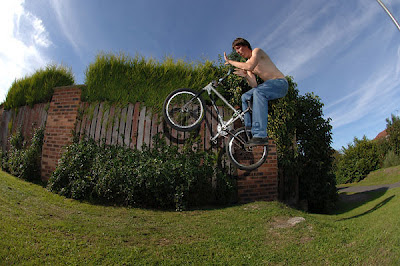 I'm certain Hman took this photo. I love this shot of Mundo, a shirtless rocket barspin on street in suburban East Boldon. There isn't many people who would throw this kind of style out there, maybes Ratboy back in the day or Nyquist but he'd be more kooky and Ratboy would be more grimy. Mundo has his super concentrated face on here, sometimes when that face comes out business gets serious. Mundo had this face on the time he tried his first flip. The scene of this flip was a sight to behold. For some reason Mundo tried his first ever back flip as a fly out on a solid concrete bowl; and when I say first flip I don't mean he'd got them down in the foam pit and then decided to try one on something solid, I mean literally his first ever attempt at getting upside down on a bike. Mundo was fiercely determined, his face was even more determined than it is above, he was totally zoned in, his expression was both insanely concentrated and hauntingly floating in neutral placidity, maybe half zen Buddhist half heavy weight contender for the world title. When I saw Mundo with his face on I knew the flip was happening. Mundo tooled from miles back at the park transition taking run after run. Everyone was getting really nervous and Mundo was deadly silent and concentrated. On one of his big hits he just let the flip fly, he rotated in slow motion spinning perfectly and on track. It was a beautiful thing. While upside down Mundo was good but as he came round to spot the landing his rotation just stalled out in a severe nose dive position and he crumpled harshly and noisily into the rock solid concrete separating his shoulder in the process. Chalk up a surgery and 4 months of recovery time. Was Mundo's flip a throw caution to the wind flight of self destructive insanity or a straight up massive balled commitment to the cause fuelled by rock solid self believe. I believe it was the latter. Mundo convinced all who bore witness to this flip how much of a bad man he truly is. I'm going to badger him into throwing a rocket B for me next time we session because my nerves can't hack another one of his flips.
Posted by Olly Olsen at 22:17