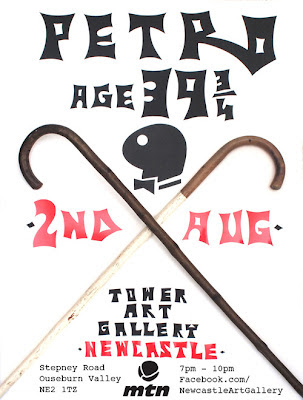 The next show at the Ouseburns newest art gallery-The Tower Art gallery is by Petro.

I heard the Gallery might be getting sponsored by an awesome and Northeast Street Foundation favourite (No not Damburger) beverage company.

The opening night is the 2nd of August. I briefly met Petro he seems cool, is it rude to say he looked a smidgen older than he claims here saying as he does that he's 39 and 3/4, I guess he had a hard paper round, maybe he still does a paper round in which case the spare parts collection from the Cycle Centre that became a fixed, ex road bike, will serve him well as he pelts newspapers at doors like 80s computer games and also like american suburban paper delivery in the 80s in general. If you were allowed to sling news papers at peoples door in this country everyone would be competing for the job.


I never managed to complete the paper boy computer game, it was impossible and I hated how little of the course you could ride in. The end of stage with the ramps and targets was the best bit, followed by the realisation you had missed 90 percent of the houses you were meant to deliver to due to bad 8 bit collision detection and even worse leaf spring joystick actuation. 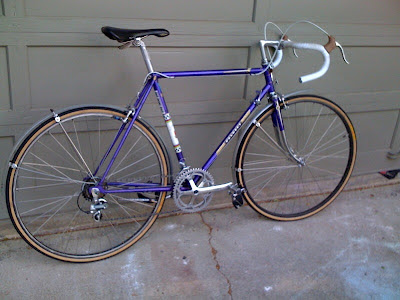 The purple Peugeot road bike pictured here is not the one that I fixed up for the show at the gallery but is of the exact same model, The recently converted purple fixie will not be used for any paper delivering and instead will be painted by Petro, displayed in the show and eventually or rather hopefully sold.