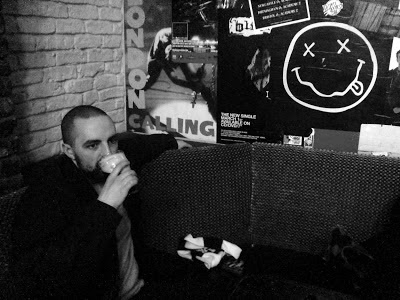 Carmine got barred from Trillions rock bar the same year I moved to town for dancing on the stage. This barring took place shortly after we stole a 10 foot high and 20 foot long Jaegermeister wall hang exposing an impossibly whack mural of a rock band underneath. It wasn't long after we raided the back room and stole what was to become known as 'the head', a heavy and ugly as hell concrete bust which took many guises and paint jobs in the Buff House and even replaced Newrick while he slept one night.

The bouncers in Trillions have the best memory of any door staff I have ever known. The only time Carmine ever got in there was one halloween when he was dressed as Sloth from the Goonies and had a huge pink paper mache head. He did some dance reminiscent of Clockwork Orange, necked a pint, did another lap of the bar and was gone. For reasons unknown the door staff changed this year and after a 10 year hiatus Carmine finally got to have a quiet pint in Trillions. Shame the place sucks as much ass as it always did and they blasted 80s Madonna the whole time we were in there.