Very often I'll feel like painting but I'll have absolutely nothing in mind about what I want to paint. Structured ideas always turn out better because if you think about the composition even at the back of your mind you'll have a good platform for it to work, the painting might still end up shit but at least there will be a half decent idea behind the shitness. Sometimes I just want to paint and I leap straight in. I started this painting when I found a huge tin of white undercoat, strange inspiration for a painting but inspiration comes in mysterious forms just like the work of god if he existed. 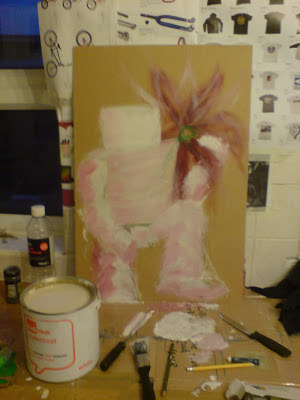 I have all these hard board rectangles in the shed which I've been painting on, I got them from various bits of dismantled flatpack furniture. I just started throwing the undercoat on with a rough thought of a Robot holding a giant flower.


I think I had a weird semi sentient bio-bot gardner from Armitage III in the back of my mind. Weird that I couldn't remember the name of this manga and had to do mad research on google to find it, why would I remember the gardeners they're in it the show for 3 minutes at the most but for some reason I did. I think they freaked me out a little in my awkward teenage years. Armitage III is a traditional cop story based in the near future interwoven with soft-core cyber porn in the form of the hot bots in 90s pvc corseting and sprinkled with teenage robotic existentialism for spotty pubescent boys. I'm so embarrassed to admit that I liked it, but I did, I really liked it. 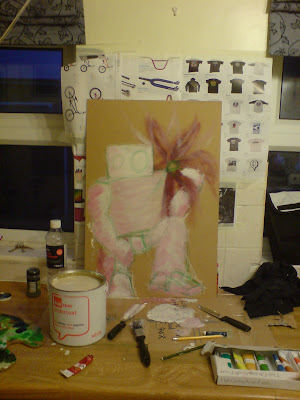 The composition was immediately awkward. The robot was hugging the edge to the left creating a tension, his hand to the left ended in his crotch, the flower over his shoulder didn't have space to exist, it was a 4th dimension anomaly and I tried to put the foot to the right on an imaginary rock but it threw his hips all wrong. I was straight in nightmare territory. 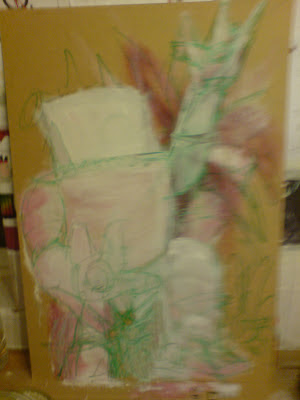 I always end up painting robots because its an easy cheat when you only understand anatomy to a certain degree, its not working for me here, I tried to change it up into a sort of rock of ages meets power blast from the sky sort of deal. 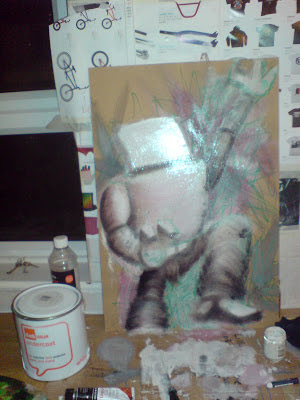 I stuck with this pose long enough to throw some values at it but I was sickened by its pointlessness and error filled posturing. 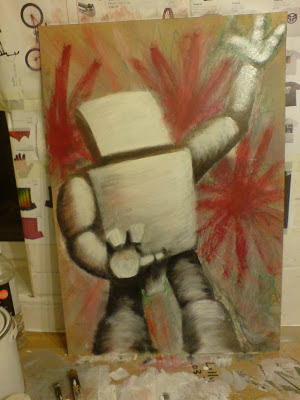 For five minutes I thought I had it by straightening the leg out, I could imagine raw power in the robots raised hand, I hashed in some flowers for background still lending towards the fucked up scene in Armitage III. 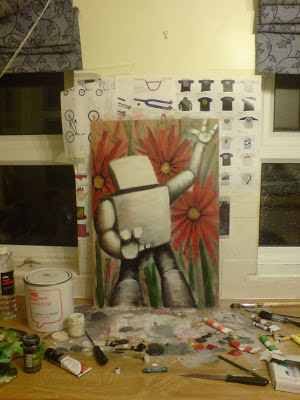 It was getting late, I was just messing about putting up the flower detail when I still had not begun to consider the awful imbalance and awkwardness within the painting. I liked the way the robot was looking up into the ether with strong light on his face but his raised hand was right up in the top right of the painting and since he was going to be looking at his hand, the viewers whole focus would be looking up into the top right corner and this is not a good thing.

I didn't like that the robots legs were missing out the bottom of the shot or that his hand was arcing up in some pseudo and camp Ironman repulsor attack. As a whole instead of feeling good after being creative and forcing my way through a painting I was instead left feeling dejected and sickened by my own artistic depravity and shortcomings. I went to bed, read a little from H.P. Lovecraft's Necronomicon and was then visited by dreams the like of which I've never suffered before or since. 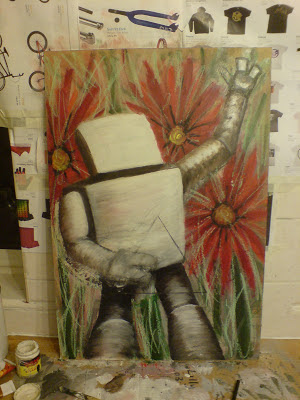 A few days later when I decided to again face the painting I thought I must change something to effect the balance. Hmm, throw a big triangular monolith in there. That worked until I tried to make the robot's redundant hand grip the monolith which turned it from monolithic and ancient technological power to going to the post office with a paper letter in a strange triangular shape. 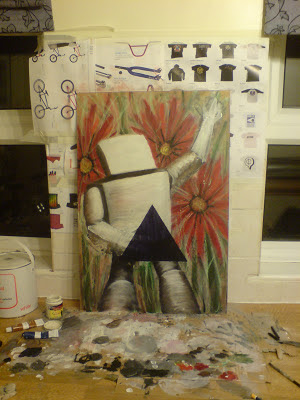 After much deliberation I decided that I couldn't make the hands work so I'd cover them with the monolithic triangle. Now it looked like the robot was using the monolith to hide behind while he jerked off and where I foreshortened the other arm to get it away from the corner of the composition it now just looked puny and weak. I sat on my kitchen bench with my head in hands questioning my abilities and worth as a painter, an artist and a man. What the hell was I doing? Why was nothing working? How can a lump of hardboard and a few colours splattered about bring me such anguish?

I was seconds away from breaking the board over my knee when I took a deep breath got a hold of myself and thought for the sake of personal growth I'm going to make this work no matter how long it takes or what tangental slant I have to take it in. My mission was now to make something of this mess. 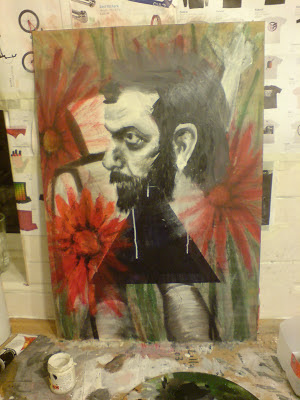 Since I was dealing with monoliths I was thinking 2001 a space odyssey, to be honest I'm always thinking 2001 a space odyssey just a little bit in my head somwhere. I remembered I had this photo of Stanley Kubrick in his youth, he had an acid head sunken eye thing going on and thought it would marry well with the supposed triangular monolith. I hashed him in and stood back pleased that I was finally ridding myself of the awkward robot. 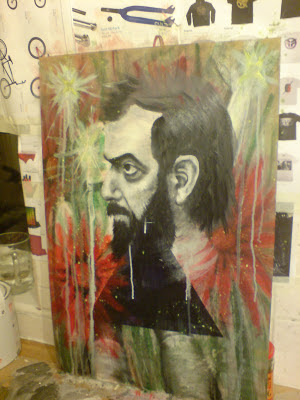 I threw up some splatters of yellow and white roughly where I wanted something to be to bring balance and harmony to the board. 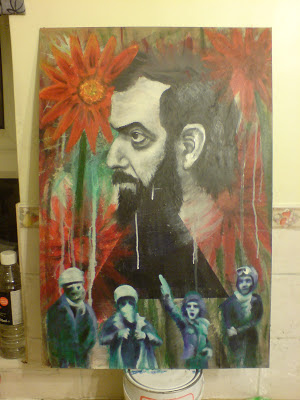 I needed something in the bottom to give the monolith a depth so I painted in some Parisian protesters from the 60s in a bluish hue but it brought more awkwardness back to the composition. I was annoyed and angry again. What have I done. Painting this board had become a war against me the paint and the surface.

Painting is a mental game, almost anyone can put paint on a surface, there's not much skill involved in the act, thinking hard and getting the paint in the right place is the hard bit. I'm reminded of Garth Merenghi when he's talking about his novel writing technique "All I do, is sit down at the typewriter and start hitting the keys. Getting them in the right order, that's the trick" 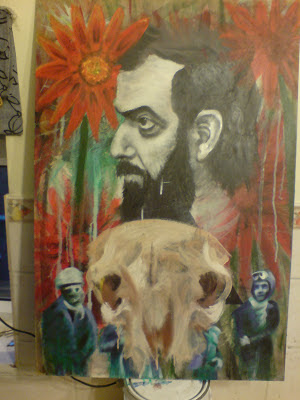 What this needs is a manky great big animal skull to bring harmonious notes to the image. 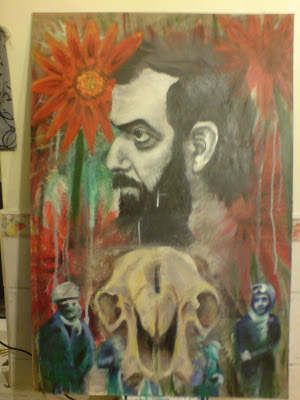 Yes, Yes, Yes, refining the skull, good vibes are starting to return, the sickness I once felt in my gut is lifting, I like something finally. 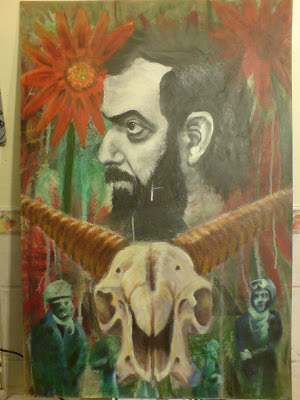 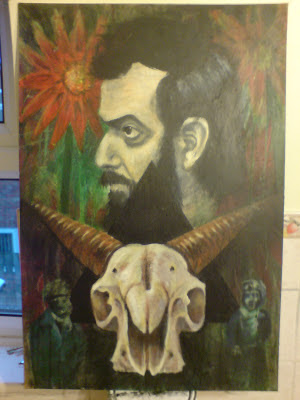 Theres a lot gone on here to what we had previously. I've, shortened and shaped the horns to keep them off the edge of the canvas. I've increased the size of the monolith and blackened it a little. I've threw a load of colour washes on the portrait of Kubrick as it's previous B+W wasn't really happening with everything else now in colour. I've darkened the background down a lot again with washes of green and blue to try and subdue it and drop it back and also give the remaining protesters a ghostly appearance. 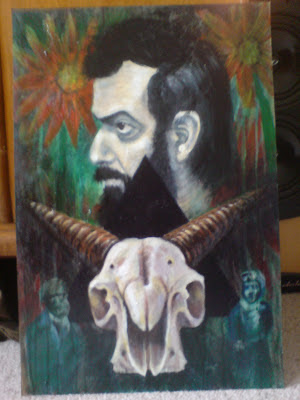 I threw a few more high lights about on Kubrick's face and darkened a few more things with some cooler bluer shadows and added a little body to the hair and I was finally reasonably pleased. The argument between me and the board was finally over, we had reached a mutual agreement, neither of us were overwhelmed with happiness but at least we had found a way to coexist. I clear lacquered the whole thing to remove the temptation for me to fiddle with the painting more and also to give it a nice shiny finish.

After promising a painting to Scott Taylor for ages I finally give him this one, partly in exchange for tattoo work he's done for me but mostly just because I think he's an awesome guy. He seemed to like it and got pretty excited when I bought it over. What more could I want form a painting.
Posted by Olly Olsen at 20:08