Following on from the Gsport hub lamp that I made a couple of months back I got to thinking of all the ways that I could improve upon the design. My main issue was with the shade, as I didn't make it myself, I just repurposed an old and cheap one, my other issue was that the design was such that the weight of the shade is supported by a cheap plastic bulb housing which had already been compromised by adding a huge steel Rekka headset cup, the resulting weight coupled with the natural instability of the Wilko product had the cheap shade wilting under the pressure.

My solution for a more professional and stable lamp made from a bicycle hub with a shade was to use a  6 bolt disc mount hub as the rotor when bolted on could form the basis of the shade. I had it all figured out in my head I just needed the hub to do it. 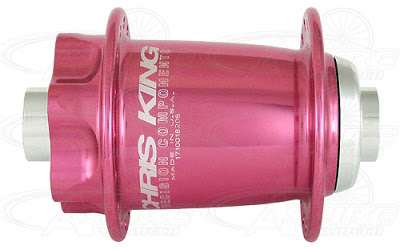 Just like when Doc Emmet Brown says 'if your gonna build a time machine into a car, you may as well do it with some style' when referring to the flux capacitor guided shiny 80s Delorean, I figured, much like when I used the Gsport hub - the finest BMX street hub ever made, that if I was going to use a MTB disc hub for a new light fitting I was going to use one that was the shit, the bees knees, the cats pyjamas of hubs and what better choice than a bright pink CHRIS KING hub. 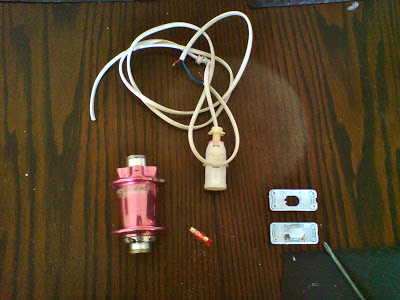 The hub I acquired had been lying around the cycle centre for some time, it was part of a pair, the rear one got made into a rotating cake stand at the cycle hub, this was to be the basis for my lamp, the hub was unrideable as the shell had a crack in it where two spoke holes had sheared off but it was perfectly useable for my repurposing. 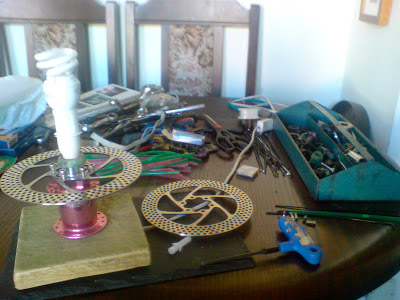 I built the lamp in much the same way as before with the Gsport version, I had to drill a bigger hole in the floorboard base to get the 15mm axle through and some of the hub contours as I wanted the non disc side flange to be flat against the base so I could nail it down through the spoke holes. The lamp internals routed through the larger axle diameter much easier this time and I hollowed out a Subrosa bar end to make a better fit between Wilko lamp fitting and hollow bolt through MTB axle. The rotor is just placed on here with the bolts on the 1st thread. 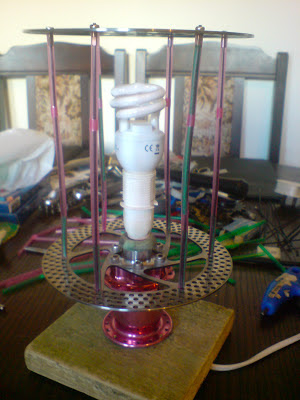 Here the rotor has been fully bolted down and I have begun to construct the lamp shade frame. I chose MPH rotors out of all the old ones I had lying around because they have hundreds of uniform holes drilled into the braking surface and I could envision that this would make sewing the fabric on to the shade frame a lot easier. To join and space the two rotors I cut drinking straws to length, strengthened with another drinking straw within for stability then I routed a spoke through one rotor through the straw and through another rotor and fastened it with a 12mm nipple. When all six struts were in place it was way sturdier than I had ever imagined. 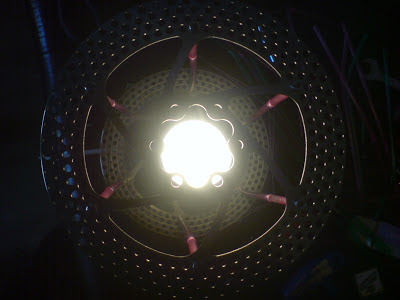 Here's a view of the set up while I was trying the wiring before I sewed the shade together. 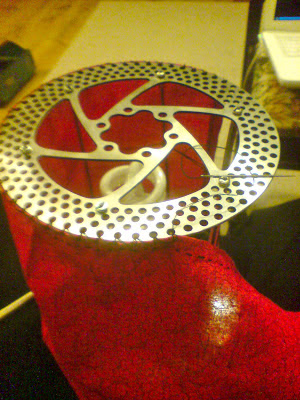 I toyed with the idea of using an old T-shirt with a skull logo for the fabric of the shade but instead used this red leaf patterned one that my mam hooked me up with. Here the fabric is about 50% sewed on. 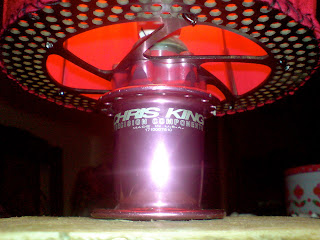 I stitched the fabric right round but just used a tack stitch up and down the seam so I can actually get in to change the bulb, I racked my brains but other than grinding the centre out of one of the rotors I couldn't work on a completely non destructive way of changing the bulb. Energy bulbs last for ages anyway as long as the missus doesn't launch it about too much. 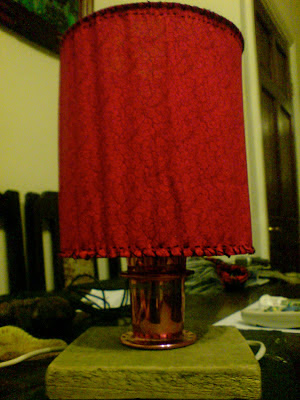 The completed stitching, I'm no seamstress like, my shit is a lot more caveman style practicality. 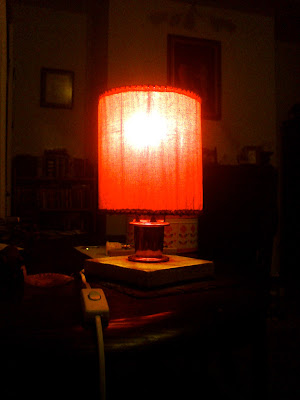 The finished lamp glowing away in my sitting room, Kevin McCloud would be proud.
Posted by Olly Olsen at 01:12